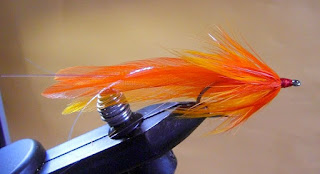 Seaducers are perhaps the most overlooked fly today. They've been around since the late 19th century, and have been used for nearly every predator species from brown trout to stripers to tarpon. They've been credited by Chico Fernandez in landing his world-record redfish.

The Godfather of Fly Fishing, Lefty Kreh, writes in his book, Presenting the Fly, that Seaducers are "one of the best patterns for both large and smallmouth bass that I've fished. I never make a trip without some of these in my box.".

Despite it's many accolades, this fly is seldom seen in fly shops. But if you tie flies, good news - they're easy to tie, and the materials are common.

The SR71 version differs from the standard Seaducer in that, like other "SR71" patterns modified by Catch Cormier, they use Schlappen feathers for the hackle as opposed to standard hackle. Of course, a very webby hackle feather will also work. Unlike the standard version which "pushes" water when stripped, the SR71 version "pulsates" when stripped. Less effective in stained water, but more effective in clear water.

1. Tie in several strands of Flashabou or Krystal Flash.
2. Then tie two saddle hackle feathers on each side. The feathers are slightly curved; tie them splayed out.
3. For the body, tie in a pair of schlappen feathers with the tips tied to the hook. Then palmer the feathers toward the hook eye and secure off with thread.
4. Build up a few wraps near the eye of the hook. Then soak the wraps with Hard As Nails or epoxy to prevent the toothy fish from tearing up the wraps.
Newer Post Older Post Home