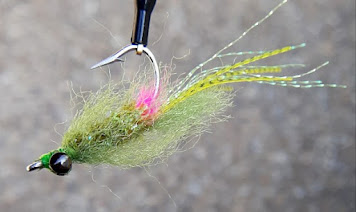 This fly is a hybrid of the wildly-popular EP Spawning Shrimp and the GB (Got Butter) Spawning Shrimp by Justin Hanson. The materials and techniques are identical to the GB version, except instead of artic fox (GB) I use EP fibers - but NOT the brush!  Ideally, the GB version would be ideal...artic fox is amazing material. But to do the GB fly proper requires 3" fur - difficult to find!

From May through October, when shrimp are prevalent throughout the marsh and nearshore waters, this fly rules!  You can fish it "straight", i.e., cast it out, let it sink, then retrieve along the bottom in short strips.  But the most effective method is suspended about 3 feet under a VOSI (the flyrodders popping cork).  The VOSI makes a popping sound that attracts specks, the strip/pause technique causes a vertical motion of the fly underneath.

NOTE:  The mono/EP Shrimp Eyes make a better looking fly, but aren't necessary as far as fish catching ability goes.  The fish seem to concentrate more on the action of the materials.

Here's a link to Justin's video on the GB Spawning Shrimp 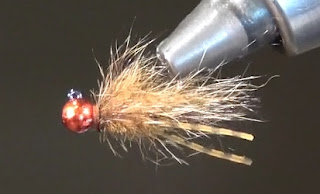 The Rio Bandito is sometimes referred to as the Mardi Kraw, although there's another fly of that same name. It was created by Chris Johnson of Living Waters Fly Fishing, for the Rio Grande Perch in the Hill Country waters of Texas.

I bought a couple while in the shop a couple of years ago and when I returned to Louisiana I found it to be my go to fly. I’ve caught nearly every species of sunfish we have here to include crappie, warmouth, and both spotted and largemouth bass. It’s murder on small creeks! 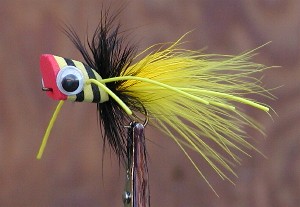 Game fish love surface poppers. The noise attracts fish especially when the water is murky or the light level is low.  In fact, some of the biggest reds I've caught were on this fly in dirty water. It floats high and is very durable. 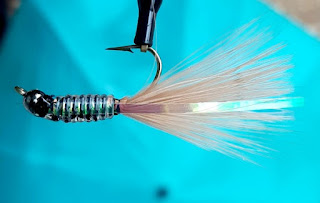 At the Acadiana Fly Rodders annual conclave in 2002, I won a posterboard of flies in a raffle. It contained over a hundred flies tied by members of the club, or by folks who had donated old flies to the club.

When I got it home, I started picking through the collection, seperating them into boxes for salt water, bream, bass and coldwater trout. Turns out there was one fly that had fallen from the posterboard the night I brought it home. When I discovered it, my wife claims I set a new record in the 400-meter dash. That’s about how far it was from my back door to the edge of the neighborhood pond.

Four of the five voices in my head told me this fly was going to be special. The instant I cast it out and it hit the water, the fish were over it like crawfish etouffee over rice!

I made every attempt to find out who tied this fly and what it's name was, but no one knew. I then perused the internet hoping to find the pattern somewhere, but again to no avail. Someone suggested I call it the "Amnesia Fly", because it doesn’t recall what it’s real name is, or who tied it.

I’ve done very well with this fly for bass, bream, crappie and pickerel. I’ve even tied a saltwater version for redfish, and it’s done well too.  I'm sharing this pattern recipe just in case I get amnesia myself and forget. 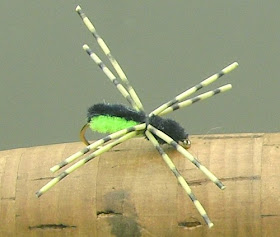 The Slow Sinking Spider is the creation of Stephen Robert of Houma, Louisiana, and has become one of the best bream (sunfish) flies anywhere. It's a replacement - and an improvement - to the legendary Accardo Ligon Spider, which is now discontinued.

Stephen says, "I use this pattern sight fishing to bluegill and bass. If you have bright sunny days and the fish will not hit poppers and you can see the fish let this fall slowly in their face or in their beds.".

In their presentation, "Magnificient Seven Panfish Flies", warmwater experts Glen 'Catch' Cormier and Larry Offner list it in the seven must-have flies. On many occasions, this fly has done the trick when popping bugs or deep nymphs have drawn few strikes. The SSS is not only a great pattern, but is fairly easy to tie. Making it a good choice for novice tiers. 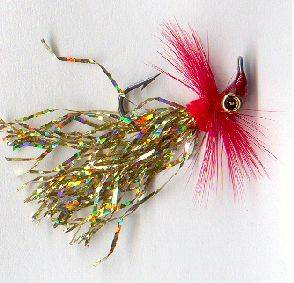 Ron's Redchaser is a fly I developed in the Spring of 2001. One of the things I find most rewarding about fly tying is the problem solving aspect of it. I was met with the challenges of the marsh being particularly muddy. I needed a fly that would be visible in bad water. I also wanted a fly that would push water and look like a mouthfull to big fish. Having already come to the conclusion that the mouth of redfish is on the bottom of their head for a reason (they feed down) I knew I wanted a fly with a little weight that would settle on the bottom.

Combining these attributes, plus a desire to always have the fly ride hook up, and be fairly weedless, the redchaser was born. After first developing this fly it took me a long time to actually get a fish to refuse it. It produced agressive strikes in many varied conditions. Rons Redchaser is now my go to and signature redfish fly. I hope it catches as many fish for you as it has for me. 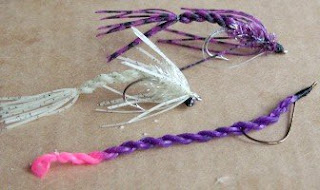 Previously known as the Sqwirm Worm - until that name became associated with a trout fly tied from Squirmy toy material - the Cabali Worm is one of several innovative creations from fly tying genius Ted Cabali of River Ridge, LA.

According to Cabali, the basis of this fly was "renewed interest in fly patterns that imitate spinning or casting rod lures rather than specific aquatic organisms".  The Cabali Worm isn't a specific set pattern, but a group of patterns that closely imitate the conventional angler's plastic lures, and which use silicon strip material (trade name: Sili-Legs).  For example, the original variation of this fly was a saltwater attractor that imitated soft plastic baits used for speckled trout and redfish. 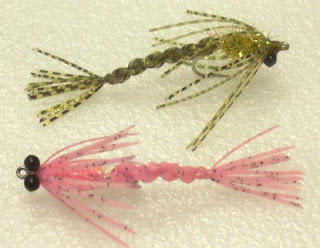 The Cabali Worm was born of the same principle, except with bass the intended target. The instructions I list are for creating the worm body. What you do with it is up to your creativity. The original Cabali Worms (flies on the left) imitate more of a lizard or crawfish, and are deadly on spawning bass. The variation on the right resembles more the straight-tail plastic worm. Swim this fly by stripping it in small but steady pulls. It's light enough to cast with a 5 weight, and float thru grass mats like those found on many lakes, but still sinks without weight.

Sillilegs, aka Silli Legs, come in many colors, patterns, and sizes. For an idea of what colors and patterns are available, check out the Barlow website. You can also find these same type skirts at most fly shops. 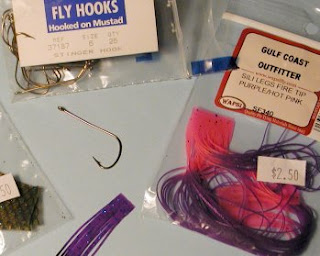 This fly calls for using the regular-size cut silicone skirt layers that are slit to the last 1/4" on each end. The layers are very easy to use because the ends are not slit. Other materials will include the hook of your choice, flat waxed thread, and possibly chenille and beads (a beadhead version of this fly, with a short, small hook, is a killer).

Each layer of sillilegs contains 20-22 strands. Depending on hook thick a worm you wish to make, 10 to 16 strands are needed. The thinner worms are more limp, have more action in the water, and are easier to cast with a light rod. This needs to be balanced by the fact that thicker worms can catch the bigger bass. 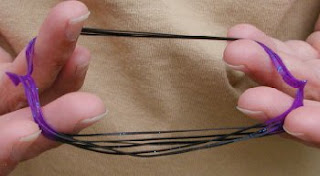 Let's make a 12 strand worm. Seperate each layer into two sets of strands, 6 each. Cut one end of the layer, but leave the other end intact. Grab the cut ends, seperate them, and begin twisting. After enough twists, poke a finger in the middle (where the layer end is), bring one end back to the other, and let the two ends slowly "bimini twist" on each other. If the worm comes up a bit crooked, pull and stretch the worm out a few times, and this will straighten it up. Use small paper clips to hold the worms in place until the tying process is ready.

I'll give two tying options here. The first calls for using a Mustad 37187 bass hook. Bend the top 1/4" in a bendback-style. Then tie the clipped end of your sqwirm body onto this bent section. The worm will fall right alongside the point. In fact, pass the hook between Sqwirm strands. Attaching a mono weedguard at this point also acts to keep the sqwirm from sliding off the hook point and doing crazy things. This pattern best represents the typical bass worm. 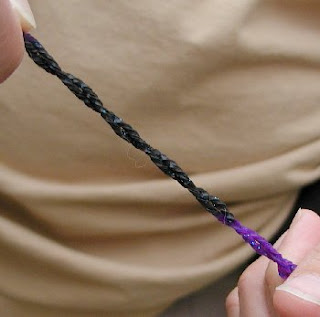 The second option - my favorite - is the beadhead worm. I've found that 4" plastic worms on a jighead can be as deadly on bigger bass as large worms with large hooks. Just not as snagproof. I use a 4mm beadhead, vernille, and size 4 or 6 jig style hook, 60 degree flat eye, usually black nickel.  Tie the worm body to the hook shaft, then tie in a matching vernille body and wrap up to the beadhead. Finish off on the beadhead. This fly has incredible motion when retrieved in small strips.

TYING TIP UPDATE 1 When twisting the split layer, the middle is where the layer remains joined. If this "joined end" breaks, take the two sections and merge them similar to a loop-to-loop connection. Then restart the twisting. 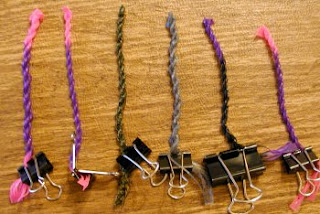 TYING TIP UPDATE 2 The "joined end" is unstable as is. It won't last but a few strikes from a fish, then the worm unravels. To prevent this, make a Duncan Loop with mono, and slip it over the worm above the joined end. Tighten the mono loop down firm around the tail, then trim. You can even apply a tiny amount of super glue or UV epoxy around the mono for durability.

Redfish love charlies of all kinds, and this pattern by Barry Dauphin of Lafayette is a cousin to the charlie, but without the wing. The secret to the flies success, and to its name, is the shiny tail. Barry says the tail on the Shiny Fon-Fon is that little extra, or lagniappe, that gets Mr. Redfish on the fly like a hungry Cajun on french bread!