In last year's legislative session, House Bill 691 proposed much-needed changes in Louisiana's fishing and hunting licenses and fees.  With strong bipartisan support, the bill passed and was signed into law.  In a few days - on June 1st - this new licensing structure will take effect. Here's a summary of the changes that will affect recreational anglers:

For a complete list of changes, or more details, go to the LDWF Licenses & Permits webpage.

Great Gobbules! Bream are on the beds 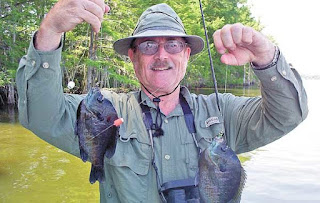 With so many family matters going on, I've been negligent in checking in on statewide fishing reports.  But I did get one last evening that the gobbules are on the beds at Lake Concordia.  If that's the case, then it's certainly happening elsewhere.

Some of our newer readers might ask: "What is a gobbule?". It's a bream.  I refuse to use the word 'sunfish'. That's a hippie word.  What does a sunfish do? Lie in the sun, getting a tan?

Bluegills, redears and longears are true fighting machines. They deserve a name that sounds like one of Freddie Mercury's concert shoutouts to energize his crowd.  So gobbule (pronounced gobb-bool) it is!

Tackle:  I recommend a five-weight outfit because it's somewhat common for a bass or catfish to hit a bream fly. If you fish ponds, then a 3-weight is fun to have as you won't have to worry as much about those predatory species taking you into heavy cover.

Flies:  Surface flies like popping bugs and Triangle Bugs are a must.  Not only do bluegills like to hit on top, but it's super cool to watch them slurp a fly!  Redears mostly feed subsurface, so sinking flies like Cap Spiders, Rosborough-style Hares Ears, Fluff Butts, Slow Sinking Spiders, Black (or Purple or Blue) Boudreauxs, and many others will work on them.  And of course, work on the bluegills as well.

Strike indicators:  anytime I can use a small football type strike indicator, I do.  Keeping the fly in the strike zone longer is one reason.  But it's also so much fun to see the indicator plunge down when the big gobbules hit the fly underneath.  It's important to use one as small as possible but that still floats (fly not too heavy).  Some ask me if you can use a "half a perch float" like a Vertically Oriented Strike Indicator (VOSI).  The answer is "yes", but I suggest pointing the narrow end of the VOSI towards the fly line.  Otherwise the fat end will make a pop when stripped and the VOSI will attract the fish more than the fly underneath.  Of course, if that happens, simply tie on a popping bug!

Good luck!  And if you catch a big one (or colorful one), and you're on Facebook, please post it to the Louisiana Fly Fishing Community Page.