For the second year in a row, Toledo Bend Rendezvous has been cancelled due to Covid-19 concerns. According to organizer Walter McLendon, the high number of cases in Texas and Louisiana was of great concern to having an event where folks are in close contact indoors.   Typically held the first full weekend of November at Toledo Bend State Park near Zwolle, Rendezvous is the largest casual weekend gathering of fly tiers in the country, with a long history of fly tying, fly casting, food and fishing, with only a minimal fee to cover lodging and meals. 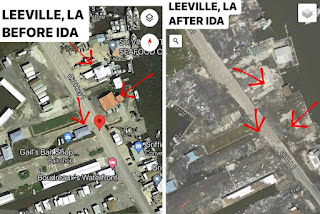 Over the next 24 hours, Ida moved slowly northward bringing destruction in the form of wind damage, tidal surges, and flash flooding to parts of southeast Louisiana, southern Mississippi and even as far east as the Alabama coast. Over one million homes and businesses were without electricity, and an estimated $15 billion in property damage.

Depending on location, it will take weeks to months, but we’ll build back and hopefully, better.  And when we’re done building back, we’ll want to turn our attention to things we enjoy the most, like fishing. Except there may not be much to offer there.

It'll take a couple weeks to determine if Ida - like Hurricanes Andrew and Gustav which followed a similiar course - have triggered massive fish kills across south central and southeast Louisiana.  Major hurricanes cause hypoxia in waters by a combination of wind-stirred organics, litterfall (leaves stripped from trees that consume oxygen upon decay), and backwater flooding. When the water recedes, it’s often dark tannic and with zero oxygen. Water temperatures in August are simply too high to overcome litterfall like they are in October and November. Fish require at least 2.0 mg/L oxygen. After Gustav, it was rare to find any water greater than 1.0 mg/L.

While hurricane-generated fish kills in saltwater are extremely rare, the problem for salt anglers will be infrastructure. Just about everything past a protection levee was damaged or destroyed, including stores, motels, bait shops… even the roads themselves.  The photos of Leeville above - before and after Ida - are typical of what happened to other coastal communities outside the protection levees.  Many business owners have already indicated they will not rebuild.