On Monday, the Kisatchie Fly Fishers hold their monthly meeting at the Rapides Westside Library in Alexandria. Time is 6:30pm. For the program, members of the club's Coldwater Committee will lead a discussion on "Gearing up for coldwater fishing" with emphasis on Arkansas and Oklahoma trout waters. The public is welcome. For details, go to www.kisatchiefly.org.

Also on Monday, the Red Stick Fly Fishers will hold their monthly fly tying session at the Bass Pro Shops in Denham Springs. Time is 7:00pm. Bring your tools, if none, the club has sets for use during the session. Materials are provided. For more, go to www.rsff.org.

On Thursday, the New Orleans Fly Fishers hold their monthly meeting at Lakeshore Marina and Fuel across from the Blue Crab Restaurant on Lakeshore Drive. Time is 7:00pm. On the agenda: the club's upcoming expo on April 6th, fishing reports, Big Year contest and more. For more info, go to www.neworleansflyfishers.com.

Also on Thursday, Pack and Paddle will host a seminar "Secrets of Successful Kayak Tournament Fishermen" at their store on 601 East Pinhook in Lafayette. Presentors will be Steve Lessard, two-time Hobie World Champion, and Brendan Bayard, IFA Angler of the Year, Hobie AOY, and multiple BCKFC tournament champion. This year's format is different in that the session will be divided into four special topics. Admission is free.  For more details, go to www.packpaddle.com.

Saturday is the Red Stick Day fly fishing festival in Baton Rouge. More on that later.

Also on Saturday, Pack and Paddle will hold another "Fly Tying Level 1" clinic at their store on 601 E. Pinhook in Lafayette. Time is 9:30am to 11:30am. Cost is $20. Covered will be fly tying tools and how to use them, followed by hands-on instruction on tying two flies effective for Louisiana. For details, go to www.packpaddle.com. 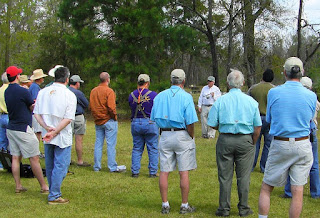 This Saturday is the 27th annual "Red Stick Day" fly fishing festival, which this year returns to the LDWF Waddill Outdoors Education Center on 4141 North Flannery Road in Baton Rouge. Time is 8:30am to 3:30pm. Admission is free.

Hosted by the Red Stick Fly Fishers of Baton Rouge, Red Stick Day is the largest and longest-running event of its kind in Louisiana.  Originated by the late Lynn Tolleson, a founding member of the club, the event has featured some of the biggest names in fly fishing such as Gary Borger, Jason Borger, Ed Jaworoski, Chrystal Murray, Craig Mathews, Nick Curcione and others. In recent years, it's featured some of the rising stars of our sport, such as Zach Matthews and Ben Roussel.

Red Stick Day also routinely features some of the most renown tiers in the country, several of whom have been featured in books and magazines. Those include Fred Hannie, Kirk Dietrich, Ted Cabali, Ron Braud, Ed Lash, Bob Lemay, Bill Laminack, and others.

While the programs, fly tying demos, and casting sessions appeal to both beginners and experts, many attendees enjoy the great food, comradery, and fishing on premises. There's also one of the largest raffles of any event in the Southeast, which raises money for the club's various educational and conservation projects.

For more info, including a schedule of activities, go to the Red Stick Fly Fishers website at www.rsff.org and click on "Red Stick Day".

The Acadiana Fly Rodders held their February meeting this past Thursday at their new meeting location, Pack & Paddle in Lafayette. Keith Richard thanked PnP owners John & Becky Williams for the generous use of their facility. He also thanked Bob Tabbert, Beverly Vidrine and Rick Latiolais for their work in guiding the club the past year.

Newly elected officers for 2019 are Keith Richard (President), Rick Latiolais (Sec. Treasurer), Jay Clark and Flip Siracusa (Program Co-Chairs). Several activities are being planned for the year, as well as topics for meeting programs. The club will also continue their support of Reel Recovery.

Keith also mentioned that his website www.TheCampFlyFishingSchool.com now has over 65 instructional videos reviewing fly fishing and fly casting. It's a free resource to anyone to use.

The Acadiana Fly Rodders meet every third Thursday of the month at Pack & Paddle in Lafayette. Meeting time is 6:00pm.

On Monday, the Kisatchie Fly Fishers hold their monthly fly tying session at the Rapides Westside Library in Alexandria. Time is 6:30pm.  This month, the group will tie the Mop Fly and the Squirmy Wormy. Beginners are welcome. Bring your tools, if none, the club has a few sets for use during the session. Materials are provided. For more info, go to www.kisatchiefly.org.

Also on Tuesday, the Lafayette Kayak Fishing Club holds their monthly meeting at Pack and Paddle on 601 East Pinhook in Lafayette. Time is 6:00pm. For more info, go to www.lafayettekayakfishing.com.

On Thursday, the Acadiana Fly Rodders hold their monthly meeting at the Outpost building back of Pack & Paddle on 601 E. Pinhook in Lafayette. Time is 6:00pm. The public is welcome.

On Thursday, the New Orleans Fly Fishers hold the 2nd of their twice-monthly fly tying sessions at St. Francis Xavier Church Hall on 444 Metairie Road. Time is 7:00pm. Bring your tools, if none, the club has sets for use during the session. Bring $1 for materials. For more info, go to www.neworleansflyfishers.com.

This Friday thru Sunday is Troutfest 2019 annual fly fishing festival at Lazy L&L Campgrounds in New Braunfels, TX. Sponsored by, and benefitting the Guadalupe River Trout Unlimited. Friday evening is the banquet, Saturday and Sunday are Expo days. One of the largest fly fishing events in the South, featuring fly tying, exhibitors, casting clinics and demonstrations, and much more. For more info, go to www.grtu.org.

On Saturday, Orvis of Baton Rouge will hold another of their "Fly Tying 101" sessions at their store on Bluebonnet in Perkins-Rowe. Time is 2:00pm. FT101 is a free one-day, 2-hour hands-on clinic covering the basics of fly tying. Pre-registration is required as class size is limited. For more info, call 225-757-7286.

A very busy week ahead...

On Monday, the Red Stick Fly Fishers hold their monthly general meeting at the Wildlife and Fisheries building on Quail Drive in Baton Rouge. Time is 7:00pm. The public is welcome. For more info, go to www.rsff.org.

On Thursday, the New Orleans Fly Fishers will hold the first of their twice-monthly fly tying sessions at St. Francis Xavier community building on 444 Metairie Road.  Time is 7:00pm. Bring $1 for materials. Bring your tools, if none, the club has sets for use during the session. Beginners welcome!  For more info, go to www.neworleansflyfishers.com.

On Saturday, it's the 17th annual Little Mo Fly Fishing Festival at the Municipal Building in Murfreesboro, Arkansas, celebrating southern Arkansas' year-round trout water and fly fishing in general. Cost is $5 per person or $10 per family. Programs, tying demonstrations, exhibits, retailer tables, biologists "State of the River" presentation and more. Saturday evening is the annual "Fly Draft". Sunday morning at 10:30 is the "Can You Taken It" casting clinic on the river. Cost of the casting clinic is $5, registration at the event. For more info, go to www.littlemissouriflyfishing.com.

On Saturday, it's the 27th annual Dr. Ed Rizzolo Fly Tying Festival in Houston.  Location is Bethany Christian Church Community Center at 3223 Westheimer.  Time is 8:30am to 3:30pm. Admission is charged.  Hosted by the Texas Fly Fishers, this event features the largest group of fly tiers of any event on the Gulf Coast, with anywhere from 70 to 100 tiers. It also features one of the great names in fly tying, and this year's special guest is deer hair specialist Pat Cohen. In addition to tying demos, there are several seminars during the day, as well as casting instruction. For more details, go to www.texasflyfishers.org.

Also on Saturday, Orvis of Baton Rouge will hold another of their "Fly Tying 101" sessions at their store on Bluebonnet in Perkins-Rowe. Time is 2:00pm. FT101 is a free one-day, 2-hour hands-on clinic covering the basics of fly tying. Pre-registration is required as class size is limited. For more info, call 225-757-7286.

One of the oldest fly fishing clubs in the state, the Acadiana Fly Rodders of Lafayette have had a steady decline in membership over the past decade.  Hoping to reverse that trend, the club has taken advantage of Pack & Paddle's offer to use their adjacent "Outpost" venue as a new meeting location. In addition, the club has a new meeting date - the 3rd Thursday of each month.

At the recent Fly Fishing Film Tour, AFR president Bob Tabbert thanked John Williams, owner of Pack & Paddle, for his support. The January meeting was held at the new location and date, and according to Bob, had a very good turnout.