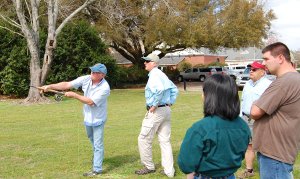 Hosted by the Acadiana Fly Rodders, the FF101 workshop is an opportunity to learn about fly fishing, or improve your knowledge and skill in various aspects of the sport. Topics will include tackle overview and terminology, equipment and accessories for freshwater and saltwater fishing, types of flies, hands-on practice of knots and leaders, and hands-on casting led by FFI-Certified instructors.

There is no cost.  Refreshments will be provided. If you have equipment, it's advised to bring it. Otherwise, the club will have several sets of rods and reels available for use during the workshop.

AFR president Flip Siragusa noted, "We've seen the success of similiar workshops in Alexandria, Baton Rouge and elsewhere. It's not only brought new people into our sport, but also brought new members to clubs. For example, the Kisatchie club grew from a couple dozen members to over a hundred member families in a few years thanks to their Fly Fishing 101 clinics."

For this reason, the Acadiana club is encouraging family participation in this event. Attendees can optionally sign up as AFR members at a special discount rate of $10 (family membership).

Pre-registration is required. To register, go to the AFR website at www.acadianaflyrodders.org and click on "Fly Fishing 101". There you will find a link to the registration form, as well as complete details about the event. 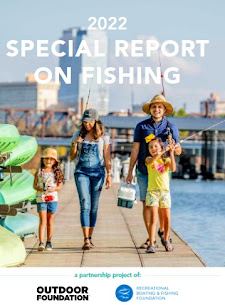 As been the tradition for the past 12 years, the Recreational Boating and Fishing Foundation - along with the Outdoor Foundation - released its annnual look at fishing participation in the United States just prior to this week's ICAST fishing trade show. The 2022 Special Report on Fishing details participation trends in overall fishing, saltwater fishing, fly fishing and other areas of our sport based on licenses, surveys, tackle sales and many other datapoints from the previous year (2021).

Overall, more than 52 million Americans ages 6 and over went fishing in 2021. This was a four percent decline from the historic high in 2020, and yet still one of the highest numbers ever. Also of interest, women composed 37 percent of participants, the highest number ever.

With regards to fly fishing... participation in 2021 also declined four percent from the historic high of 7.8 million in 2020. The 7.5 million fly anglers is still significantly higher than anytime since records have been kept.

There's more good news. The majority of 2020 participants who lapsed were in the older age groups. This was offset by nearly 17 percent newcomers to fly fishing, mostly under age 35. Almost 60 percent of all fly anglers are now age 44 and under.

Income and education. Fly fishing continues to be favored by those with higher income and with some college or college degree. Seventy percent of fly fishers have annual income of $50k or more, while 60 percent have at least one year of college or higher.

Demographics. Once again, the South Atlantic region (Virginia to Florida) had the highest number of fly anglers, representing 20 percent of the total. This was followed by the Mid-Atlantic and Pacific regions, at 17 percent.  Our region - Texas, Louisiana, Arkansas, Oklahoma - had 10 percent of all participants, or about 750,000 fly anglers.

News from the New Orleans club

Charles Miller, secretary of the New Orleans Fly Fishers, recently posted an update on Facebook regarding upcoming club activities and events. Most, if not all, are open to the public.

Saturday, July 16th - the NOFFC will hold a casting clinic at LaFreniere Park on the big lake near the concession stand, weather permitting.  Casting will start at 9:30 am. This is a great opportunity to learn or polish your casting skills. If you know of someone who would like to learn how to fly cast, please feel free to invite them as this clinic is open to the public.

Saturday, July 30th - the club's monthly fly tying class will be held at No Wake Outfitters located at 1926 Airline Drive. Time is 10:00am. A.J. Rosenbohm will teach the class. Please bring $2 to give to the instructor to cover cost of tying materials. Beginners are welcome!

Saturday, October 1st - the 14th annual Rio Grande Rodeo returns after a hiatus last year due to Covid concerns. This is the longest running fly fishing only tournament on the northern Gulf Coast. The target species is the Rio Grande Perch, the only cichlid native to North America. However, not being native to Louisiana, it's been branded as an invasive species. This year the rios are showing up in good numbers. More details will be sent out later this summer.

Saturday, January 21st - the 2nd biennial New Orleans Fly Fishing Expo will be held at St. Christopher the Martyr school gymnasium. The venue will allow for casting instruction regardless of the weather. Committees are being organized, and more details to come. If it's anything close to the last NOFF Expo, it promises to be a great family-friendly event for both beginners and experts!

Charles also reported that the club will kick off their 2nd Big Year Tournament.  This is a "mixed bag" CPR contest where the goal is to catch as many different species on fly tackle. The Big Year kicks off August 1st and will end on July 31st, 2023. Look for details and contest rules coming up on the club website at www.neworleansflyfishers.com.
Newer Posts Older Posts Home
Subscribe to: Posts (Atom)