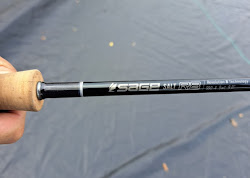 Prior to the pandemic, I had tested out a brand new mid-priced saltwater-specific fly rod from Sage, the Maverick. I stated at the time on social media that this rod was a "game changer", knowing quite well that such a term is used often and loosely within the fly fishing industry.

What made the Maverick so special was that, like it's chief competitor the Orvis Recon 2, the Mav delivered performance at all levels of casting. A trait often found in premium rods, but at half the price.

As I've stated for over 25 years, on this website and in my Louisiana Sportsman column, you don't need a premium saltwater rod for fishing the Louisiana marsh. Making a 100+ foot cast on target is not necessary when 90 percent of the targets can be approached within 20-60 feet. But you DO NEED a rod that is very accurate and casts efficiently at all ranges, has low swing weight, and has the power to move a big fish. 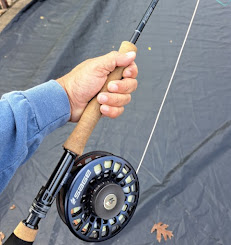 Many rods have come and gone that didn't meet those simple criteria. There were great casting rods that had high swing weight... those wore you down after a few hours of casting, resulting in open loops. There were light rods (like the BVK) that just didn't have sufficient backbone to land big reds without a prolonged fight. And while the premium Sage Salt HD was a great distance casting rod, it didn't cast very "efficiently" at close-in ranges.  The Sage reps were quite honest about their assessment of the HD, and that the Maverick was a better buy for most saltwater applications.  What they said was that Sage needed a better premium offering.

In December, at the annual Fishing Tackle Unlimited Expo in Houston, I had the opportunity to test cast the new Sage R8 - the replacement for the Salt HD. This rod just became available this week in retailers everywhere. Like nearly all premium fly rods these days, the price tag is over $1,000.

Sage advertises that the R8 uses their new R8 graphite, which adds 25 percent more strength per weight, more durability, and more power when needed. As I've said many times, the recent advances in nano-resins allow rod designers to use more advanced, lighter graphites that otherwise might be too brittle or not suitable for fishing rods. Sage also claims the R8 has better casting accuracy at all distances, and greater distance when needed than the Salt HD. 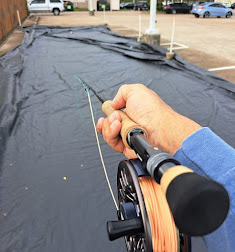 In my testing, I found all this to be true. The test where I hit an aluminum can at 40 feet, than in one false cast, hit a can 60 degrees to the right but at 50 feet, was as good a result as I've seen in any rod ever tested. For the distance cast, I boomed out over 100 feet easily and very much in straight line... consistently "tagging" a white SUV in the distance. Loops were nice and super tight. I found near zero reverberation on the shake test. There is simply nothing this rod can't do well!

Little things matter as well.  The reel seat was firm and tight. And at a time when rod manufacturers are putting shorter cork grips on their rods, WHAT A JOY it is to have a nice long grip. You truly appreciate this when casting for hours... your hand will thank you!

So why spend over one grand on a fly rod?  First, there may be a few times when wind and distance to a redfish may require that extra power in your cast. But second, if you travel to fish, there are species and locales where an accurate 100+ foot cast is a necessity. I can't tell all the number of times in my early fly years when that bonefish, permit or tarpon was right at the 80-100 foot range and my cast was only 70 feet. Becoming a better caster (which I did) certainly helped. But you can be a world-class flycaster and still fail unless you've got a really good weapon. That's why I have two premium saltwater rods in my arsenal.

I love my Sage Xi3. Would I replace it with a Sage R8? Don't think so, but it's not because the R8 is the lesser rod. In fact, after testing, the R8 might be the best saltwater rod I've ever cast.  To learn more about the R8, go to www.sageflyfish.com.

As always, click on the images for a larger view. 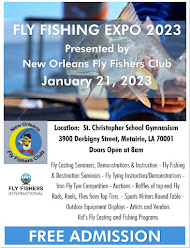 Hosted by the New Orleans Fly Fishers Club, this biennial event (every odd year) is a celebration of fly fishing, featuring all aspects of our sport. Whether you’re wanting to get into fly fishing, or a seasoned veteran, there’s a program or activity certainly to be of interest.

In preparation for the biennial expo, NOFFC has unveiled a new website. The domain remains the same, but there’s new content. Webmaster Wayne Schnell is still putting the final pieces together, but in addition to the latest club news and a more detailed “Calendar of Events”, the site will also include articles of interest to all fly anglers. Check it out at www.neworleansflyfishers.com.