When given lemons, make lemonade!

That seems to be the philosophy lately with a lot of frustrated fly anglers. April weather has not been kind to us: lots of rain, high water, dirty water, and even below normal temperatures in areas north of Highway 190 have the fish in a funk.

For fly tiers, it's been a tough past year despite lots of free time to tie flies. Shortages of materials, and delivery times that would make Pony Express seem like an improvement. But for those with materials on hand, a vast number of Zoom and YouTube Live sessions offer opportunities to tie new patterns. 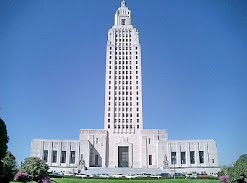 April brings some of the best fishing of the year, both freshwater and inshore saltwater.  And while we're enjoying the great bounty of the "Sportsmans Paradise", the Louisiana Legislative session kicks off.  The actions of our elected representatives and senators continue to determine how long we'll enjoy this paradise.

This year's session convenes on April 12th.  As each year, we look at some of the key bills that have been pre-filed and explain why we support or reject each bill. And like every year, there is that ONE BILL that conservationists are most concerned about, and 2021 is no different.

HB535 - Provides relative to the geographic location for the taking of menhaden.
SUPPORT - This is the major fisheries bill of 2021... and the consequence of the LWF Commission failing to undertake their obligation. It creates a menhaden fishing exclusion zone extending from the Texas to Mississippi borders, and one half-mile seaward from land. As presented to the Commission last October, there have been countless reports of dead spawning-size redfish - and other fish and mammals - as the result of nearshore bycatch. Furthermore, it was stated that menhaden are the primary food source for most recreational gamefish.  Louisiana is the ONLY coastal state that does not have an exclusion zone.  This bill is facing considerable opposition from the Chairperson of the LWF Commission as well as the menhaden industry.

HB226 - Provides relative to the process by which the Louisiana Wildlife and Fisheries Commission can change the daily take, possession, and size limits of certain fish in Lake D'Arbonne.
SUPPORT - Lake D'Arbonne crappie enthusiasts have seen a decline in this species on the lake due to it's popularity. Recent science shows that, unlike heritage studies, crappie can be overfished. In fact, Louisiana's crappie limits are "no size limit, 50 per day", by far the most liberal of any state. Current law requires that any changes to fish limits first be investigated by LDWF biologists, and a negative report filed with the Commission. This process can take up to 2 years, not to mention the very concept that a "negative impact" be needed to manage any fishery flies in the face of modern fisheries management and optimum yield.  While we strongly support the wishes of D'Arbonne residents to have a conservation-oriented limit on their lake, if passed this bill could lead to regional-based limits based on biomass capacity of regional waters (as in most states).

HB655 - Provides for removal of criminal penalties and reclassifies certain wildlife violations and provides for enforcement and recovery of civil fines by the Department of Wildlife and Fisheries.
OPPOSE - The bill basically eliminates all jail time (imprisonment) as part of the penalties and makes all game violations punishable by civil fines only. While we believe eliminating jail time in lower class violations is a good idea, there are certain violations that deserve a severe penalty. We hope this bill will be amended.

HB??? - Possible bill to increase recreational fishing license fees.
SUPPORT - This bill has been discussed openly, but not pre-filed. Louisiana is missing out on millions of federal dollars from the Wallop-Breaux excise tax, due to a change in the formula during the Obama Administration. Louisiana needs to restructure it's licensing, and having the lowest basic resident fishing fees of any state, is starving our Wildlife and Fisheries of the financial support it needs.  The funds from WBF are not just lost to our state, they end up going to other states, like California. It's like losing football recruits to Alabama, and paying for their tuition on top of that! If and when this bill is introduced, we'll provide an update on details.
Newer Posts Older Posts Home
Subscribe to: Posts (Atom)