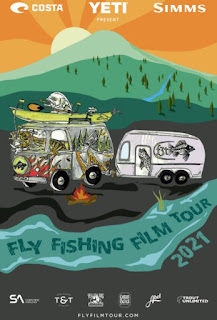 The 15th annual Fly Fishing Film Tour (F3T) will be making a stop at Pack & Paddle in Lafayette on Saturday, June 19th.  In conjunction with F3T, P&P will also hold one of their now-famous "Fly Fishing Hangouts" that afternoon prior to the showing.

F3T is a collection of independent short films highlighting the adventure and conservation aspects of our sport. Shot across the US, Canada and around the world, these films celebrate fly fishing in all it's splendor featuring great adventures, epics takes, and spectacular scenery.  F3T is shown at select venues across the country.

This is sure to be a great chance to see some folks you haven't seen during this long pandemic year. The Fly Fishing Hangout starts at 3:00pm, with beer and snacks, and games. The games include "Marshman Sharpshooter" casting to targets, and Team Iron Fly competition, where random-selected teams build a 5-step fly out of unique materials. Each team will have 40 minutes to tie their fly.

The $20 tickets are available locally in advance at Pack & Paddle or online at www.packpaddle.com.

The Senate Natural Resources Committee did not get to consider a bill to create a buffer zone for the industrial take of menhaden yesterday as planned, due to the full Senate session running very late. Instead, House Bill 535 will be considered by the committee on June 1st at 9:00am. We strongly urge our readers to reach out to the following committee members individually and urge them to vote YES for HB535.

Key fisheries bills up in Senate committee this week 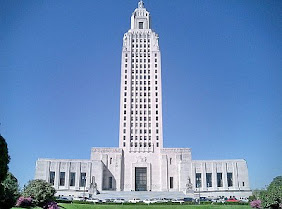 If passed by the Committee, they would then go on to the full Senate for a floor vote. Then if passed there, it's on to the governor's signature to become law.  As of now, each faces a tough task in committee. But if they pass committee, chances are very good they become law.

This provides a 1/2-mile shoreline buffer for the commercial taking of menhaden, with a few extended zones such as Grand Isle (3-mile). While the bill has been championed by several conservation organizations, including FFI Gulf Coast Council, Theodore Roosevelt Conservation Partnership, and others, CCA Louisiana has led the biggest effort. It would seem this is a no-brainer, especially given that Louisiana is one of the few states that allows menhaden harvest, and the only state that doesn't have a buffer zone. However, the menhaden industry has been lobbying state senators very hard.

HB691 - Provides relative to fee increases for the Department of Wildlife and Fisheries (since amended, we STRONGLY SUPPORT)

This bill would provide the first system increase of fishing and hunting licenses in 20 years.  It would also simplify the number and extent of current licenses. The fee increases are needed as revenue shortfalls from LDWF-owned oil and gas continue to decline, and current fees are way insufficient. In addition, Louisiana is missing out on millions in matching revenue from federal excise taxes. One example of how outdated Louisiana licenses are... the resident senior hunt/fish combo is just $5. This bill raises it to $20.  By contrast, the same Texas license is $32.  Negative responses to this increase have been similiar to this "Only wealthy retirees will be able to afford this license".  I kid you not!  Since being amended on the House floor to delete kayak registration and reduce lifetime licenses, the bill has collected more support. But will it be enough to overcome a strong anti-increase sentiment among folks who really don't care about our wildlife other than how much they can take?  We'll see.

The Coastal Conservation Association (CCA) of Louisiana Statewide Tournament and Angler's Rodeo (STAR) kicks off Saturday, May 29th and runs through Labor Day. One of the largest and richest saltwater fishing tournaments in the country, offering over $500,000 in prizes, STAR is open to anglers of every age. Entry fee is $35 for CCA members.

Again this year, there is a Fly Division and a Kayak Division. Within the Fly Division, there are two (2) regional divisions, East and West. The winner of each division gets a $1,500 gift card to Academy Sports. The Kayak Division has four (4) regional divisions, East, Southeast, Southwest, West. The winner of each division gets a Hobie Compass kayak. And of course, there's always the chance that a fly or kayak angler will catch a tagged redfish. The first tagged fish wins a Chevy Silverado, the 2nd one wins a Keystone Passport travel trailer, and the next 8 win fully rigged boats.

Getting back to the Fly Division. As we state every year, the best time for catching that big trout on fly is early in the contest - the month of June to be exact. One exception: the Southwest Division usually runs several weeks behind due to the influence of high river water from the Atchafalaya River.

To register for CCA STAR, and for current leaderboard standings, go to www.ccastar.com.

Two more clubs hold in-person meetings as we continue to transition back to normal. And one of the most important fisheries bills in over a decade gets its hearing on Wednesday.

On Monday, the Red Stick Fly Fishers will meet in-person for their monthly general meeting. Location is Broadmoor United Methodist Church on 10230 Mollylea Drive in Baton Rouge. Time 7:00pm. Bring your rod/tackle as there will be casting practice and/or instruction on the grounds.  Guests are welcome. For more info, go to www.rsff.org.

On Wednesday, at 9:00am, the Louisiana House Natural Resources Committee will convene. On the agenda is House Bill 535, by Rep. Joe Orgeron of Golden Meadow.  HB535 would create a 1/2-mile exclusion zone for the commercial reduction harvest of menhaden (pogy). CCA Louisiana, the FFI Gulf Coast Council, Louisiana Charterboat Association, and several other groups support passage of the bill. Currently, Louisiana is one of only three states that allow reduction harvest within state waters, and the only state without a buffer zone.  For more info, go to www.ffigcc.org or www.ccalouisiana.com.

On Thursday evening, the Acadiana Fly Rodders will hold a "Phoenix" meeting at Fabacher Field at Southside Park in Youngsville. Gathering starts at 5:30pm, with meeting at 6:30pm. It's their first meeting in 18 months, and the club is looking to rebuild membership. Bring your rod/reel - there's fishing on premises and lots of lawn for casting or casting instruction. The public is welcome.  For more info, go to www.acadianaflyrodders.org.

Register this month for the Jack Rodeo 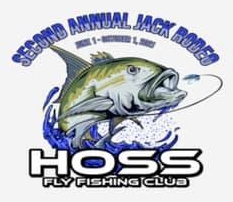 Fly anglers hate jack crevalle.  Hook one, and it wants to take your fly line and backing to Cuba.  And just when you stop him from going outward, comes the long haul back in.  Like towing a boat… using a bicycle!

Well here’s your chance to show Jack whose boss, and get awarded for it.  Hosted by the Historic Ocean Springs Saltwater (HOSS) Fly Fishing Club, the Jack Rodeo is a CPR tournament open to the public, including Louisiana flyfishers.  Simply catch and land a jack crevalle on fly and fly tackle (that will be the hardest part for sure!). Then take a photo of the fish on a measuring device with fly fishing gear in the scene. Submit the photo, along with documentation, to David Buckner (email on form).

The tournament is catch and release unless a state record is caught. Winners will be announced at the HOSSFly meeting on October 12th.