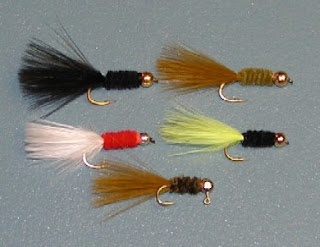 In the 1980s, Mark Hester was tying a fly rod friendly version of the marabou jig popular for crappie fishing. Using a finer chenille, a pinch of marabou tips, and a much lighter jighead (1/100 oz), he referred to this microjig as the Fluff Butt. It's light enough to cast with a 5 weight rod, yet with less material bulk it's also able to sink quickly on light leaders.

An avid crappie angler, Mark also experimented with fishing the Butt under a tiny nymph float (aka, strike indicator) next to submerged structure with great success. However, fishing it "straight", much like stripping in a woolybugger, creates an action that gamefish can't avoid.

In the early 90s, the Fluff Butt was one of the very first flies to be converted into a beadhead fly (thanks to an article on fly beads in a British publication titled Stillwater Trout Angler). The beadhead version doesn't sink nearly as fast. But a fish caught on a beadhead fluff butt can qualify for a Louisiana and IGFA fly rod record, while one caught on the jighead version cannot. 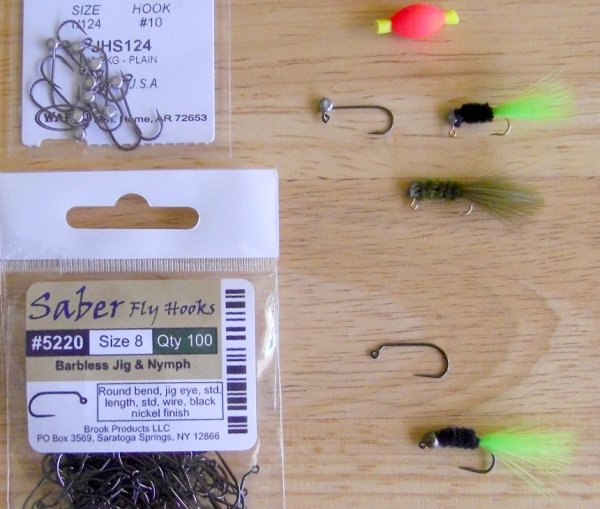 Same as you would use to create a woolybugger. In fact, the fluff butt is best described as a bugger minus the hackle, but there are two other key distinctions as well:

1) use fine chenille or vernille instead of regular chenille

2) use fine marabou tips instead of the "wet hackly" ones

If using a beadhead, slide the bead up the hook to the eye. Wrap thread, then tie in a marabou tail. The length of the tail beyond the point where it's tied down should be as long as the hook shank.

Tie in a section of vernille. For best results, lay the vernille atop the hook almost to the bead (or lead head), then tie it in across it's length. If you do this, then as you spiral the tag section of vernille around the hook forward, it will lay even. When you get to the bead (head), cinch the vernille down with several wraps of thread. Then finish off with a whip finish or other knots.
Newer Post Older Post Home