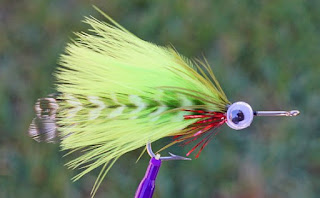 Another great fly of the late 20th century that gets overlooked today. In fact, it's getting near impossible to find a Whitlock Saltwater Baitfish in fly shops. But make no mistake, this is a "must have" for the Louisiana speckled trout angler. It's also good for pickeral, redfish, and bass.

Here's an addition to the fly that makes it even more effective: tie in a couple strips of lead wire along the "nose" of the fly. This sinks the nose on the pause between strips, adding more action to the marabou tail. Try it, you'll like it!!

Along with the marabou action, the eyes on this fly make it special. Predatory fish key on eyes, especially in clear water.

1. Wrap a thread base from midway on the hook back to the bend of the hook.
2. Tie in a clump of marabou feathers, equal to length of the hook, at the midpoint of the hook.
3. Tie in one grizzly hackle feather on each side. Make sure the feather tip extends just a smidge beyond the marabou.
4. Tie in the schlappen feather and palmer forward, stroking back the feather barbs.
5. Tie in the Flashabou or Krystal Flash for gill on the bottom of the body.
6. Wrap the thread back just a little. Add some antron dubbing to the thread and wrap over. The dubbing builds up a base for the eyes to attach.
7. Mix a bit of 1-minute epoxy and soak the dubbing with it. Then place an eye on each side and press it against the antron. This will hold the eyes in place for now.
8. Mix up a tiny batch of 2-ton epoxy or use UV Epoxy and brush over the eyes and dubbing base. This will keep the eyes from getting knocked off by hard hitting predatory fish.
9. OPTIONAL: As mentioned, add a strip of lead wire to each side of the hook above the eyes. Secure with thread. Use mono thread if you wish to keep the base appearance.