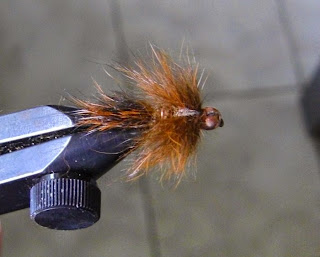 The original Hares Ear is one of the oldest flies known, attributed to 19th century English tier James Odgen, but likely many decades older. This version of the classic nymph was by Polly Rosborough, author of the book "The Fuzzy Nymphs".  Rosborough was a proponent of flies that are suggestive in nature and which have a soft, buggy profile that displays motion even in still waters.

I saw this fly - minus the beadhead - tied by Rosborough at the 1993 Federation of Fly Fishers National Conclave in Livingston, Montana.  In addition to being the first to add a "gold rib" to the hare's ear fly, Rosborough used a dubbing loop of fibers from the mask of the rabbit to make an especially buggy thorax.  I later added a bead head, which at the time, was still fairly new to flies here in America.  It eliminated the need for adding lead wire to give weight.  The fibers of the tail, along with the spun fibers of the thorax, add subtle motion to this fly that is especially effective in enticing fish. While it's a great trout fly, it's even better for redear sunfish (chiquapin), bluegill, and Rio Grande Perch.