It's that time of year 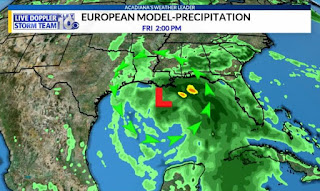 A broad, monsoonal-type disturbance in the Caribbean is expected to move into the Gulf later this week. Two models - GFS and Euro - call for northward movement and increased flow of moisture.  But the Euro model calls for some development and a more northwestern path.  At the least, it could mean a significant rain event for south Louisiana.

Memorial Day weekend is one of the busiest fishing periods of the year.  Expect everyone to keep a close eye on this disturbance.