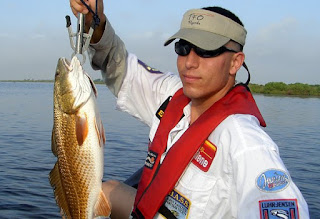 It was a tradition for nearly two decades. Members of clubs from Louisiana and Mississippi, as well as a few members from clubs elsewhere, would gather in late June or early July for a weekend of surf and marsh fishing, featuring a shrimp boil on Friday night and fish and shrimp fry on Saturday night. Sponsored by the Red Stick Fly Fishers, the Grand Isle Fly Fishing Weekend (GIFFW) was centered out of Blue Dolphin Inn on the beachfront at Grand Isle.

Last year, the GIFFW was cancelled due to a scheduling snafu. That resulted in RSFF discussing the future of the event and other options. At a meeting this Spring, Saltwater Chairman Randy Leonpacher discussed the concerns and issues with continuing at Grand Isle, and proposed a move to Leeville. The club voted nearly unanimously in favor of the change.

So the Grand Isle Fly Fishing Weekend is now the "Leeville Fly Fishing Weekend" set for June 22-24, 2018 with headquarters at Boudreaux's Waterfront Motel in Leeville. As in the past, participants are free to stay whereever they like. UNLIKE the past, everyone is responsible for making their own reservations. Once again, the event will be culminated with the Saturday evening fish and shrimp fry to take place at Boudreauxs, with the fish being contributions of freshly-caught cleaned fish filets from participants.

Members of organized fly fishing clubs are invited to participate.  In order to insure enough food - including salad, drinks and dessert - Randy is asking that those coming give him a headcount. For more info on the event, go to the LFF Forum or Red Stick Fly Fishers forum on www.warmfly.org.
Newer Post Older Post Home