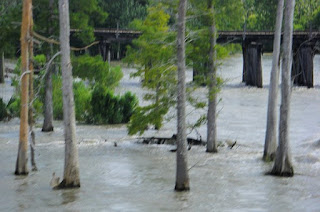 Last Monday, the rapid rise of the Mississippi River forced the Corps of Engineers to open 8 bays on the Bonnet Carre Spillway northwest of New Orleans. On Friday, the Corps of Engineers opened up 13 additional bays bringing the total number to 21. With the river expected to hit flood stage (17 feet) on Tuesday, there's some anxiety among lower river residents. The good news is that the river is expected to crest at 17 and begin dropping by next week.

Anytime the spillway is opened, concern arises about impacts on the lake's speckled trout fishery. Yesterday morning on Outdoors With Don Dubuc radio show, Slidell-based guide Mike Gallo pointed out that the plume of freshwater will ride the lake's steering currents along the south end of the lake eastward. This traps the saltier, clearer water on the northeast side of the lake. Eventually the entire lake will become fresh.

Until then, that northeast quadrant will offer some very good trout fishing. Redfish are not impacted as much by freshwater as trout. And the influx of grass shrimp, shad and skipjack could benefit the lake's reds. The influx of nutrients could also benefit the lake's growning striper population. Of course, there's always the danger of massive algae blooms that result in low dissolved oxygen as they die off. But after numerous openings and numerous studies, LDWF has concluded that years after an opening prove to be very beneficial for the lake's fisheries.
Newer Post Older Post Home