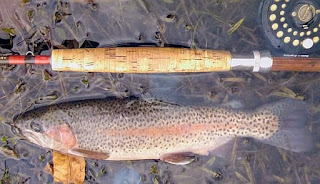 This past Saturday was the 16th-ever Little Mo Fly Fishing Festival in Murfreesboro, Arkansas. Organized by Shreveport resident and Little Missouri River fly fishing guide, Jeff Guerin, it's a celebration of fly fishing with emphasis on the year-round tailwater trout fishery below nearby Greeson Lake.  The event was well attended with many of the "usual suspects" - as Jeff calls them - present. In fact, it seemed the rough weather played less a role in limiting attendance than did the current epidemic of cold and flu.

For Louisiana trout enthusiasts in northern and western parishes, the Little Missouri River is our closest year-round trout water, only 2.5 hours north of Shreveport in the Ouachita Mountains.  For that reason, the highlight of this event for us - and for all who fish the Little Mo - is the annual "State of the River" presentation.  Arkansas Game and Fish Commission biologist Kris Nault shared statistics and catch reports, and pointed out that, because of the flooding of the Spring River hatchery, stocking numbers would be down 25 percent this year. But to compensate, the average size would be slightly up.

Since last October, the generators on the dam have been under renovation. During this time, there has been no generation. Normally when there is no generation, there is a very small release of water, referred to as leakage amount. However, the Corps has been releasing much more than the leakage amount. This "minimum flow" is about 6-8 inches higher than normal. It has had a profound effect upon the river. Nearly all the shallow rocks are covered, there's flow across the river, the trout are spread out all over, and there's more bugs for this time of year than many of us have ever seen. The trout are strong, and rich in colors.

Work on the turbines will continue until April or May, during which time minimum flow will continue. It has revived the conversation of minimum flow on the tailwater. Even half of what is now being released would be a great improvement over the trickle and would result in an additional mile of trout water during late summer - in addition to the benefits already witnessed in this "trial run". It may take an act of Congress (literally) for it to happen, but given what has happened on the White and Lower Mountain Fork rivers, there is hope.
Newer Post Older Post Home