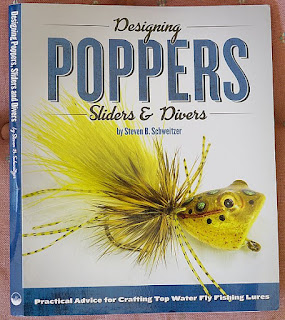 Last week, "Designing Poppers" made it's way into a number of bookstores and online retailers such as Amazon. In fact, at the Atlanta Fly Fishing Show I picked up one of the first copies. The folks at Angling Bookstore had just received a shipment before the show, and within the first hour of the first day had sold most of their copies. By 10 o'clock that morning they had none left!

It's seldom that a fly tying book gets so much pre-publication hype, much less become an instant classic once it hits the shelves. But after spending a week going over this new book by Steven Schweitzer, my conclusion is... it lives up to the hype!

The publisher of Designing Poppers says this: (it's) the most comprehensive book ever written for the topwater lure maker. Three-hundred pages are full of methods, procedures, and examples richly illustrated with 800 detailed full color photographs. Over 50 tips & how-tos  and DIY projects are included. Also included are common design elements and step-by-step instructions for 17 of the most effective patterns.

Everything the publisher states is accurate. There are also over a dozen charts comparing different material aspects, including hooks, pen marker types and colors, coating types, Copic color patterns and much more. To my surprise the book also included, at the end of each chapter, a gallery of flies by featured artisans. Two of the featured tiers are Louisiana's own Kirk Dietrich and Ron Braud. Congratulations to both!

Several times I tried testing the book to see if there was some topic or item it could've missed, and so far, it's covered them all. Granted, a few could've had a bit more information or detail. But given the scope of this book, and the enormous amount of subject matter, Schweitzer did an amazing job of gathering information, collecting detailed photographs, and covering so many topics.

The book comes in binder form for easier access to pages at the tying desk. It sells for $44.95. Designing Poppers is worth every penny!   Rating 4.9 out of 5.
Newer Post Older Post Home