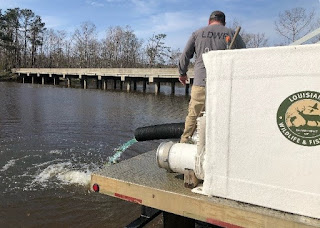 One of southwest Louisiana's most popular fly fishing reservoirs, Bundick Lake, was restocked recently with more than 40,000 fish. This effort was to help rejuvenate the fishery following Hurricanes Laura and Delta last Fall.

The lake took a direct hit from Laura, causing a high volume of organic debris to be blown into the lake. The decomposition of organics, along with high water temperatures, caused dissolved oxygen concentrations to fall below critical levels. Resulting in a massive fish kill.

Among the species stocked are: 1,200 pure-strain Florida largemouth bass, 22,000 bluegill, 8,000 redear sunfish, 10,500 white crappie, and 50 pounds of threadfish shad. The fish were supplied by the LDWF freshwater hatcheries.

Hatchery Manager Kristi Butler is optimistic. "Based on preliminary sampling results, predator densities and competition for food are low. These factors, combined with the sizes and genetics of the bass we are stocking, will result in a very high success rate".