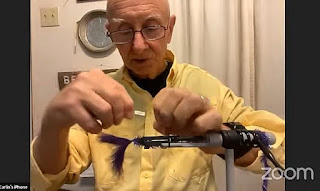 With COVID-19 restrictions still in place - and likely for the next several months - Louisiana fly fishing clubs will continue to hold their routine fly tying sessions online.  Since last April, the Kisatchie Fly Fishers - and later, the Acadiana Fly Rodders - have been conducting "Virtual Tying Tuesday" via the Zoom meeting application. Then, in December the Red Stick Fly Fishers hosted a club meeting using Zoom under the hosting of the FFI Gulf Coast Council  (owners of a pro Zoom account).

In 2020, Virtual Tying Tuesday was only available to club members and only using Zoom. The Pro account restriction of 100 users per session was one impediment to general public broadcast.  But the greater impediment was bandwidth.  Over 50 "live" users results in some degradation.  It's a problem that Zoom has had since it's explosion in popularity the past year, and an issue they are working hard to improve.

In December, KFF went to simulcasting VTT on YouTube.  Live streaming to the Tube allows for unlimited number of participants, and the greater bandwidth of their mature platform results in better video quality. In addition, YouTube live streams can be "cast" to smart televisions (those connected to internet).  Watching fly tying on a 48" TV in high definition is a blast!

Equally important, YouTube sessions are recorded. Late for a session? No problemento!  Just drag the red dot on the video timeline to the far left and start from the beginning.  If you miss it all together, the video is usually available for 48 hours after the session.