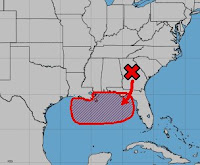 We've been tracking reports of the possiblity of a tropical disturbance forming in the northern Gulf of Mexico later this week. As of 10:00am this morning, that possibility has been raised to 80 percent.

According to the National Hurricane Center, a trough of low pressure associated with a rare cool front over central Georgia is forecast to move south into the northeastern Gulf. Once it moves over the very warm waters of the Gulf, it's expected to strengthen. Gradual development is then possible.

By Thursday, the system will then likely move northward and westward. While the models show several different tracks, the most consistent place a landfall either just east of Slidell or south of Beaumont. Either location would result in a large amount of precipitation for south Louisiana. The other unknown is how organized the system will be when it lands - depression, tropical storm, or hurricane.

Attendees to the annual Leeville Fly Fishing Weekend this coming weekend will be notified if there is any change in plans.
Newer Post Older Post Home