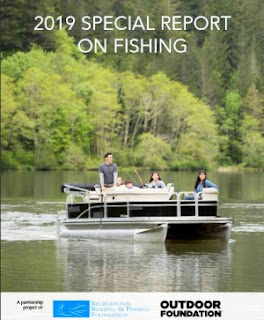 As is the case each July, the Recreational Boating and Fishing Foundation has released it's Special Report on Fishing. The 2019 Report will be part of the "State of the Industry" presentation at this week's ICAST in Orlando, Florida. It contains results from a comprehensive survey which targets angler participation in the previous year (i.e., the 2019 report covers 2018 participation) in the United States.

RBFF works with the Outdoor Foundation and a variety of market research and consulting firms in compiling the survey. The survey contains detailed information and trends on fishing participation by gender, age, ethnicity, geographic region and more.

The report also breaks down the participation by types of fishing, including fly fishing. And here, there's good news! Continuing a trend that began in 2010, fly fishing remains on the rise in America.

Other continuing trends of fly fishing participation of the last decade continued in 2018.  Greater female participation, growing Hispanic participation, and a growing youth movement. In fact, the age group 25-34 now accounts for 19.1 percent of fly anglers in the U.S., with age group 35-44 second with 15.7 percent.

More evidence that fly fishing is strong among younger anglers - less than 25 percent of current fly fishers are 55 years or older. This is the lowest percentage of senior fly anglers in a decade.

Another interesting statistic from the survey was the level of participation among fly anglers. Over 98 percent identified themselves as either "avid anglers" or "would like to fish more". This indicates that the interest among participants is very strong and not likely to lose interest in the foreseeable future.