A half-dozen items to catch up on

Just got back from 8 fantastic days in northern Colorado with fellow members of the Louisiana Hiking Club. Not counting the 4 travel days. It was mostly hiking, but I did spend two half days fishing and a full day fishing with my younger son Tiger Jake. Most of the waters were raging from runoff, the result of heavy spring snowfall and recent above normal temperatures. But we did find some fishable water, catching mostly brookies and cutthroat on dry fly.

A lot happened while we were gone. Hurricane Barry, for example. So let's catch up on at least a half-dozen items you may have heard about. Or maybe not.

1. Hurricane Barry aftermath.  The greatest damage appeared to come from the storm surge to unraised structures outside the storm levees below Houma and Golden Meadow. One of those was PAC Kayak Rentals at Pointe-aux-Chenes. In the 3 1/2 years since Eddie and Lisa Mullen established PACKR, it has become the most popular kayak fishing launch spot on the Gulf Coast, and site of numerous tournaments. The PAC Shack restaurant - which is raised - was intact. But the launch and shop were totally destroyed. The good news is that plans are underway to rebuild.

2. Fish kills. Anytime a hurricane hits Louisiana, the possibility of localized fish kills is high. In late summer, very warm water is low in oxygen. When leaves are stripped from trees by strong winds and blown into this water, they consume what little oxygen exists during decay. On Monday, Louisiana Wildlife and Fisheries (LDWF) received reports of kills around the lower Amite River, Blind River and Manchac. LDWF is investigating and determining the extent of the kill.

3. Rescheduled events from Barry. Dates have been set for the LA1 Slamboree kayak fishing tournament and Pack & Paddle's Spoon Fly Tying class. The Slamboree - hosted by the Lafayette Kayak Fishing Club - is now set for Saturday, August 10th. The Spoon Fly tying class will be held this Saturday, July 27th at 9:30am. Cost is $20. As of yesterday afternoon, a couple seats were still available. 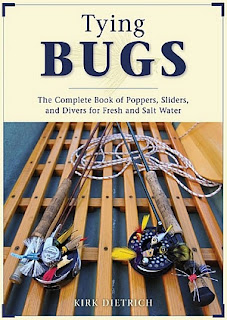 4. Kirk Dietrich's book is now published. It's not an exaggeration to say this is the most anticipated fly tying book of the year - and possibly several years!  Kirk, a native of Chalmette and lifelong resident of southeast Louisiana, is a nationally-renown fly tier recognized for his many innovative warmwater and saltwater patterns. Those include the Kirks Spoon (sold by Orvis), the Rattle Rouser, the Squirrelly, and numerous balsa poppers and divers. He's written numerous articles for magazines and websites, many on the subject of tying or fishing bugs. So it made sense that his first book would be "Tying Bugs: The Complete Book of Poppers, Sliders, and Divers for Fresh and Salt Water".  Stackpole Books (the publisher) has released a promotional card with the following: "The most complete fly tying book on poppers, divers, sliders (collectively called "bugs") ever written. Includes over 400 detailed step by step instructions with historical anecdotes for traditional patterns such as Lefty's Bug, Peck's Special Popping Minnow, Sneaky Pete, as well as innovate patterns tied with the latest materials. All facets of bug making are covered...". And there's much more. The book is 224 pages with 917 color photos! It can be pre-ordered from Amazon - available September 1st - for $39.95. Or a signed/inscribed copy from the author via Paypal (check Kirk's Facebook page for instructions).

5. The 28th annual Dr. Ed Rizzolo Fly Tying Festival. Hosted by the Texas Fly Fishers, the 2020 event has been announced for Saturday, February 8th, at Bethany Christian Church on Westheimer in Houston. Featured tyer will be Gunnar Brammer of Duluth, Minnesota, an amazing young tier who specializes in designing and tying predator flies for all big game species. The Rizzolo Fly Tying Festival also features the largest contingent of tiers of any event on the Gulf Coast, from several states.

6. Enjoy this break from SweatFest. This morning's temperature here near Alexandria was a chilly 61 degrees! Over the next several days, both high and low temperatures north of Highway 190 will be below normal, with below normal humidity. Folks on the coast may not feel as much of the cool, but it should still be more comfortable than the last few weeks. I'm anxious to see how the fish like this cool weather! As far as SweatFest goes, it'll be back soon enough. We're also watching a possible tropical development in the Gulf.
Newer Post Older Post Home