Winter 2019: news of it's demise was premature 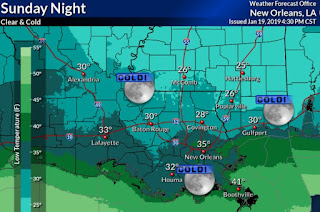 A week ago everyone was saying what a mild winter we're having, and that Spring would be here early.  My poor lizard blood - which can't take cold very well - was hoping they were right.  Especially after having a great speckled trout trip to the marsh - and reading of many others!

As if outraged by those comments, Mother Nature has responded with a swift kick to our collective groin. The polar vortex that has descended upon us in Louisiana this weekend led to the cancellation or postponement of several fishing events including the very popular Minimalist Challenge kayak tournament.  Sadly, it's the first of a trio to come over the next two weeks.

For most parishes north of Highway 190, we can except several days of highs in the 40s over the next two weeks, with 1-2 slightly warmer days between fronts. Lows will be in the 20s and 30s. Things will be slightly warmer on the coast.

Low air temperatures bring low water temperatures and that negatively affects the metabolism of fish.  But the real problem is the wind associated with these systems.  A second look at the forecast revealed that we're in for breezy conditions over the next 15 days.

Let's hope the weather service's accuracy - or lack thereof - continues and this prolonged cold spell doesn't happen.  But if it does, I'm prepared.  Just bought another box of hooks and looking forward to tying up more flies for the season ahead.
Newer Post Older Post Home