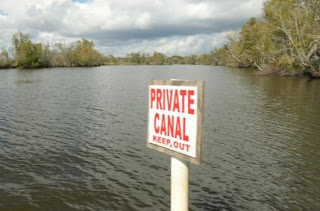 This past week, the Louisiana House Civil Law and Procedures Committee approved House Bill 391 by Rep. Kevin Pearson of Slidell by a 5-3 vote. Setting the stage for a big vote by the full House this Tuesday. The bill would provide public access to running waters, with certain exemptions.

In the committee hearing, the bill was amended to exempt water bottoms where navigation has been prevented or impeded by an obstacle permitted by the Corps of Engineers, and to running waters during migratory waterfowl season when such waters have been posted.  A third provision bans watercraft with combustible engines that may cause damage to bottoms or banks or submerged vegetation.  The bill also limits liability of the owner of waterbottoms open to public access.

Meanwhile, on yesterday's More Outdoors with Don Dubuc and Martha Spencer, guests Rep. Kevin Pearson and Capt. Daryl Carpenter (board member of Louisiana Sportsman Coalition) spoke about the merits of the bill and dismissed some of the false claims made by the opposition. There was a feeling by the opposition that the bill would never make it out of committee. According to Pearson, it was a demonstration that people do have a voice and can make a difference.

Pearson and Carpenter encouraged listeners to continue to call their legislators and make their support for HB391 known. And if possible, to attend the House vote on Tuesday at the state capitol. To find out who your legislators are, and how to get in touch with them, go to www.joinlasc.com/speak-up.
Newer Post Older Post Home