The Great Blizzard of December 8th - is more to come? 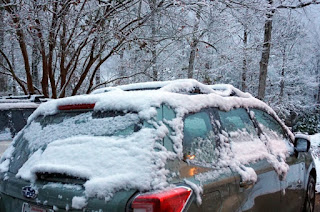 A few months back, we mentioned that the Old Farmers Almanac was predicting a colder than normal winter, with above-normal snowfall for the Deep South. While many may have dismissed the OFA forecast, several climatologists were predicting likewise.

Sure enough, Friday turned out to prove them right. Significant amounts of snow fell across Louisiana, as far south as Houma. Some parts of the Northshore area reported up to 8 inches of accumulation. It was the most "sneaux" we've seen in many years.

Now here's the interesting part... ALL of the forecasts predicted the most likely snowfalls to occur between mid-December to early February. So we're not even in the peak forecast period yet.

The most likely scenario for sneaux in our state is a combination of (1) the jet stream dipping deep into south Texas,  (2) Gulf moisture streaming from the southwest at the upper levels, and (3) a blast of arctic air.  All three were in place this past Friday. The first two factors look to remain in place for the next couple months. Which means that any blast of cold air could bring more white stuff for some part of our state.
Newer Post Older Post Home