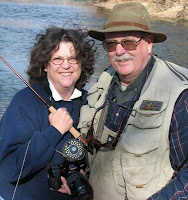 The Wilsons have authored several books on warmwater fly fishing, have created several well-known flies, including the "Bass Bully", and have given, and continue to give, presentations across the country on their favorite realm of our sport. But they're not one dimensional - they also happen to be editors of Southern Trout Ozark Edition magazine.