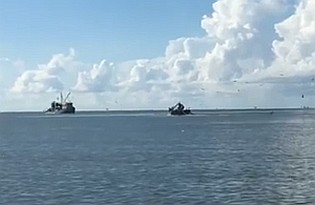 Last Thursday at their monthly meeting, the Louisiana Wildlife and Fisheries Commission adopted a Notice of Intent (NOI) to add coastal buffer zones to Gulf menhaden harvest regulations.  The proposed changes would implement a coastwide buffer for commercial harvest of one quarter-mile (¼) mile offshore, with 1 mile buffers off Elmers to Fourchon and off Grand Terre, and a 3 mile buffer off Grand Isle.

Days before the meeting - shortly after this item was added to the agenda - a coalition of conservation groups led by CCA Louisiana, Louisiana Charter Boat Association, American Sportfishing Association, Theodore Roosevelt Conservation Partnership and others issued a response in opposition to the proposal.  In a letter to the LWFC Chairperson, they stated, “Our coalition believes that a quarter-mile buffer zone is insufficient to adequately protect Louisiana’s wildlife and other fish resources from the substantial damage inflicted to the local ecosystem by industrial menhaden or pogie harvesting.”.  Later, the Fly Fishers International Gulf Coast Council announced it's opposition to the NOI, stating that "such a ridiculously small buffer zone desecrates the intent of marine conservation".

Last summer, videos and photos of hundreds of dead bull redfish (spawners) resulting from menhaden bycatch made social media and were later featured in outdoor magazines, drawing national attention and outrage from anglers and other conservationists. Nearly all this bycatch occurred within a mile – sometimes just yards – off beaches. Louisiana is the only state that does not have a buffer zone for menhaden harvest.

This past Spring, conservation groups attempted to pass a bill that would create a buffer zone. Although all groups (including the FFI Gulf Coast Council) supported a one-mile zone,, House Bill 535 ended up being a compromise with a 1/2 mile zone, with wider exclusions for Grand Isle and Grand Terre.  The bill sailed through the House, but some political maneuvering by the Senate Natural Resources Committee Chairman forced the bill to go into reconciliation just hours before the end of the session. The bill died in limbo. Conservation groups vowed to bring a similar bill back in 2022, but without the compromise.

Concerned anglers and other conservationists are being asked to submit comments relative to the proposed rule to Jason Adriance, Fisheries Division, Department of Wildlife and Fisheries, P.O. Box 98000, Baton Rouge, LA 70898-9000 or via email to  jadriance@wlf.la.gov  before Thursday, December  2, 2021.