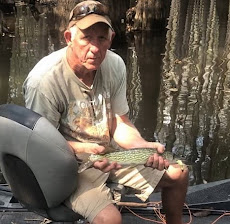 At their annual convention last night, the Louisiana Outdoor Writers Association recognized the "Fish of the Year" in both conventional and fly fishing categories.  This year's recipient in the fly fishing category was Jim Johnson for his 1.64 lb Chain Pickerel caught in Cocodrie Lake out of Forest Hill.  Bradley Cole Thurman of Meadow Lakes, TX, received the "Rod and Reel" honor with a 106.20 lb Black Grouper caught out of Port Fourchon.  Both fish are new state records.

Jim is a board member of the Kisatchie Fly Fishers of Alexandria, and a member of their Fly Tying Committee. He loves tying streamers which are effective for bass as well as other predatory species such as pickerel.

Jim says he's caught bigger "grass pike" but decided to enter this one to familiarize himself with the new LOWA record registration process. His fish eclipsed the previous 1.27 lb record held by Ardes Johnson since 2002. The overall state record for chain pickerel is 5.75 lbs taken by Chris Marien on Kincaid Lake in 1977.