Cristobal bears down on Louisiana coast 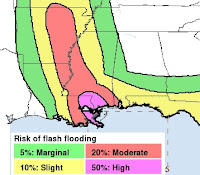 Later today, Tropical Storm Cristobal will make landfall south of New Orleans with peak winds of about 40 mph and gusts up to 60 mph. Heavy rain bands which moved into southeast Louisiana, coastal Mississippi and Alabama, and the Florida Panhandle, will extend northward as Cristobal moves into north Louisiana tonight and tomorrow.

What Cristobal lacks in strength, it makes up for in size. The storm surge from this storm has been significant for a non-hurricane, with as much as 4 feet of water inundating areas from Clermont Harbor, MS, south to Hopedale. Grand Isle has also been inundated from storm surge.

The storm forced the cancellation of the Lafayette Kayak Fishing Club's Louisiana Slamboree tournament, as well as the K&C Central Louisiana bass tournament on Lake Vernon. The timing has also been bad for speckled trout anglers as fishing has been on fire from Grand Isle and Leeville, and out west at Holly Beach and Big Lake. Solid stringers of 14 inch and larger trout were taken since Memorial Day.

The center of the storm is expected to travel along Interstate 49, with heavy rainfall forecast on the east side of the center.  This will likely put a hurt to some great bream fishing now happening across northeast and east-central Louisiana.
Newer Post Older Post Home