While you were quarantining - five new products for 2020 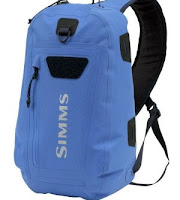 Many non-essential businesses are beginning to reopen, including fly shops and other fly fishing related retailers. As they do, fly anglers might be surprised to find several new items arriving as we move into summer. These were products we expected to see in Spring, until the pandemic arrived.

Here are the ones that we think will generate the most excitement:

Simms Dry Creek Z Sling Pack - Submersible packs aren't new. What's different with the DCZ is the TruZip, a 100% waterproof, self-healing zipper that isn't a tooth zipper. While the pack incorporates lots of interior room (enough for a laptop?), it also features a water-resistant exterior pocket for quick access to keys or wallet. What excites me most about the DCZ is that it comes in a gorgeous Pacific Blue color as well as the usual camo. After all, this is fishing not hunting. MSRP $229.

Orvis Hydros fly reel (upgraded) - The Hydros is one of the best values in a mid-priced saltwater fly reel. The machined body is complimented by a sealed clutch-bearing drag and low startup inertia. For 2020, Orvis has reduced the weight while strengthing the top-end drag. It also comes in LSU Purple. What's not to love? MSRP for the Hydros IV (8-weight model) is $259. 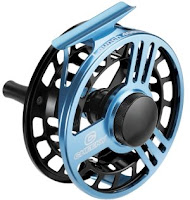 Cheeky Launch - Friends will tell you that I love my Cheeky reel. It's not just functional, but I love the simplistic style and color. Also a big positive: a narrow spool which eliminates line stacking. For 2020, Cheeky has replaced it's popular mid-priced Boost series with the Launch. Lighter and with improvements on their sealed carbon drag system, the Launch 400  (8-weight model) weighs only 6.8 ounces and comes in a beautiful light blue color (notice that I love blue). MSRP is $249.

Sage Maverick - this is a new mid-priced saltwater rod series that replaces their Motive series. I had an opportunity to cast this new rod at a show back in December before it was even announced. I was blown away. Unlike the Motive, the 7-weight Maverick had no problem casting 90-100 feet of line on target. Not that I fish that far out, but that type of reserve power comes in handy at times. No problem casting 30 feet on target either. Now the question is, how does it fight a big red? Sage salt rods have always risen to the occasion there, and if the Maverick does, it'll be one of the best salt rods on the market at any price level. MSRP $550. 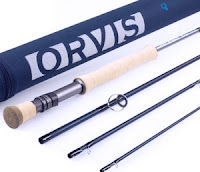 Orvis Recon II - At the December expo, the Sage rep told me, "We're aiming for the Orvis Recon". The Recon has been in the top tier of every group review, e.g. "shootouts", often rating above premium rods costing twice as much. Orvis is not sitting on their laurels. For 2020, they've adapted their Helios 3 technology into the Recon. Now I like the Helios 3, but I don't think it's the best premium rod (some friends do). So for me, adding H3 tech to the Recon might not be an improvement. If Orvis successfully managed to keep the beloved Recon taper while injecting the Helios vibration reduction, then this rod will certainly remain king of the mid-priced rods. MSRP $549 for the 8-weight model.
Newer Post Older Post Home