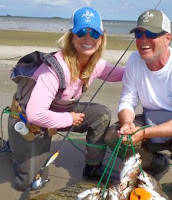 We were very saddened to learn yesterday that Ann Taylor, co-publisher of Louisiana Sportsman magazine, the St. Charles Herald-Guide and other publications, passed away after a courageous bout with pancreatic cancer.

Ann and her husband Tony started the Louisiana Sportsman magazine - the state's largest outdoors publication - roughly four decades ago. She was its editor at the beginning, and most recently, and wrote numerous articles over the years covering her wide range of interests from hunting, fishing, cooking and camping.  A devout Catholic, and native of Houma, she and Tony raised their children to enjoy the outdoors as well.

Louisiana Sportsman eventually became "Sportsman LLC" when it expanded to include North Carolina Sportsman, South Carolina Sportsman, Mississippi Sportsman, and so on.  Each of the offshoot publications copied the LAS formula of a magazine featuring locally-based articles and columns, outdoors news features, specific how-to and where-to information, and probably most important of all, conservation-oriented editorials.

Ann's strong dedication to conservation led Governor Bobby Jinal to appoint her to the Louisiana Wildlife and Fisheries Commission in 2009. She served until 2015. In 2012, the commission elected Ann as chairman of the Commission.

It was under Ann's guidance that led that Sportsman magazine sought out Pete Cooper, Jr., to begin writing a monthly column on fly fishing. "Fly Lines" was authored by Pete until 1999, and continued again in 2000 when Glen "Catch" Cormier (myself) was asked to be contributor.  Earlier this year, in response to budget cutbacks, the column was moved from printed version to online (website only). I never dealt closely with Ann over these long years, but always admired her dedication to details and making the magazine one of the very best in the outdoors industry.
Newer Post Older Post Home