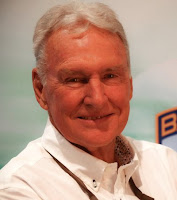 The creator and host of one of the most popular fishing television shows of all time, Jerry McKinnis, passed away yesterday morning at age 82.  For more than five decades - including 26 years on ESPN - McKinnis could be seen on "The Fishin' Hole" promoting fishing and conservation for the average angler.

After a brief stint in professional baseball, McKinnis moved to Arkansas and began guiding on the White River. He was soon giving fishing reports on a Little Rock TV station.  In 1965, he started filming fishing segments for audiences which soon led to his nationally-syndicated TV show. In 1979, he signed a deal for his show with a new sports network called ESPN. The Fishin Hole TV show was the 2nd longest running show on ESPN, only after Sportscenter.

At a time when many popular fishing personalities limited themselves to a particular style of fishing, McKinnis had no boundaries. One week viewers might be watching him fish for bluegills, another week for bass, another week for pike. And a few episodes each year, he could be seen fly fishing for trout, bass or panfish, often on his home waters of northern Arkansas. A few of his fly fishing partners included coach Bobby Knight and baseball legend Ted Williams.

McKinnis was both a member of the Bass Fishing Hall of Fame and the IGFA Fishing Hall of Fame. His company, JM Associates, produced a number of popular fishing shows including "The Spanish Fly" with Jose Wejebe, "Orvis Sporting Life" with Rick Ruoff, "The Bass Class" with Denny Brauer, and many others.
Newer Post Older Post Home