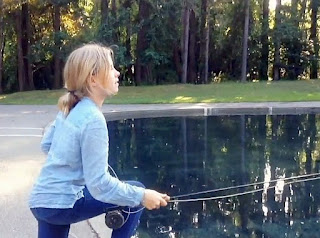 Last week, as they do each summer, some of the best conventional casters and fly casters in the country gather at the American Casting Association Nationals in friendly competition to see who is the best at  putting a lure or fly at given targets, or reaching out to long distances.

Maxine McCormick, the 15-year old wondergirl of fly casting once again made news as she set yet another record at the ACA Nationals in Pasadena, California.  Her total in the three Women's Fly Accuracy events totaled a whopping 291 out of a possible 300 points!  Her nearest competitor, Beth Statt, finished with 257 points.

By contrast, Steve Rajeff and Henry Mittel, both considered the greatest fly casters of modern times, finished 1st and 2nd in the Men's Accuracy Division with 294 and 290 points. Rajeff won the Trout Fly Accuracy contest with 98 points and the Bass Bug Accuracy with 97 points. But Mittel set a national record in winning the Dry Fly Accuracy, scoring a perfect 100 points!