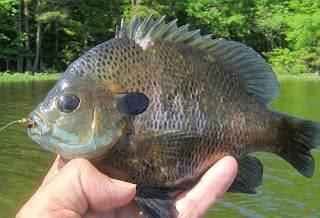 Last week, over 4,800 black crappie and 4,600 bluegill were stocked into False River near New Roads. The average size of the crappie was 5 inches, while the average size of the bluegill was 4 inches. The fish were reared at Booker Fowler Hatchery near Forest Hill. Additional stockings will continue on periodic basis. Other species stocked in recent months include largemouth bass and redears.

The stockings represent part of the efforts to restore this once-great fishing lake, at one time ranked one of the five best freshwater lakes in America. In the late 90s, the lake began a rapid decline, blamed in large part on agricultural drainage into the lake, resulting in a buildup of sediments over the large shell beds that served as spawning beds.

Another part of the restoration will revive the "flats" that were covered with sediment. Beginning in mid-January, an estimated 95,000 cubic yards of sediment will be dredged from the lake bottom on the North Flats using geotubes that filter out the sediment and transport it to an area adjacent to the lake. The dredging operation is expected to last about 7 months.

Funding for the dredging project was secured by legislation sponsored by state representative Major Thibaut in cooperation with the False River Watershed Council. A watershed management plan, revised this past year, will draw from the expertise of many parish, state and federal agencies to insure the longterm vitality of False River.
Newer Post Older Post Home