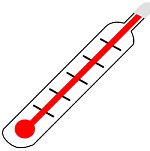 Readers may be questioning my wisdom. It wouldn't be the first time anybody has done that. But in this case, it's in reference to the weather.

A month ago, I stated that August was the last full month of SweatFest. And that September would bring us our first taste of cooler weather. Well, we're into the second half of the month and we haven't seen a hint of a cool front.

Let me define what I consider a "cool front" in Louisiana. It's based on temperatures in Alexandria (state center). When either (a)  nighttime temps dip to 60 degrees or lower, or (b) when daytime temps dip below 85 degrees AND nighttime dips below 65 degrees.

Why is a cool front so important to us anglers? Fish activity is triggered by water temperature. Hot water holds less dissolved oxygen (DO). After a long, hot summer, The DO in most water bodies is very low.  Low DO means sluggish fish. Just as important, the stress placed on fish during long periods of low DO results in weight loss.  That's why Spring fish are usually bigger and healthier than late Summer fish.

As we approach the Fall equinox, a phenomenon known as radiative cooling begins. So even on these hot days, lakes are cooling down... but it's very minimal. In fact, the current water temperature here on Cotile Lake is 84 degrees - only 4 degrees less than the last day of August. The combination of hot days and high humidity are insulating the heat escape.

But a "cool front" as I described accelerates the radiative process, driving surface water temperatures into the 70s. Strong north winds associated with these fronts in combination with cool nights bring oxygen levels up. The result is "Fall Vigor". Both fresh and salt species get very active - and remain so usually until late December.

As pointed out, we've had late cool fronts before (September 27).  But we're also having record hot temperatures for the second half of September.  Today's high in Alexandria will be 97 degrees with a heat index of 104.

Before anyone screams out "global warming!", a word of caution. One indication of global warming is the extent of seasonal melt of the Arctic ice cap. The National Snow and Ice Data Center reports that this year's extent was in the "top ten" of meltoff.  But not nearly as bad as 2008, 2012, 2015, and 2016. Four of those years we had cool fronts in the first half of September. So the problem isn't as much global warming as it is a deflection in the jet stream.

There is some good news. The "love bugs" have shown up. The old timers used to tell us that when the bugs show up this time of year, it's two weeks to Fall. Over a lifetime, I've found their prophecy to be mostly correct. Let's hope it is again - people (and fish) are waiting!