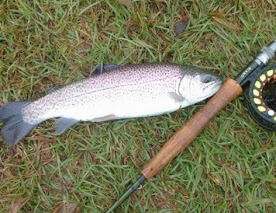 Once again, as they have for the past 14 years, Baton Rouge Recreation (BREC) will stock "rainbeaux trout" in a few selected ponds in East Baton Rouge Parish. The exact dates and locations are usually secret for a couple days. But the timing is typically a few days before or after Christmas so that youngsters can enjoy the fishing while on school break. The daily limit is four (4) per person.

Usually at the time of the BREC stocking, there's the stocking of trout in the Lamar-Dixon pond in Ascension Parish, also managed by the local recreation agency.

In early January, LDWF stocks almost 20 ponds across the state as part of it's "Get Out and Fish!" community fishing program. Each location has a fishing tournament in conjunction with the stocking. Locations are announced on the LDWF website as well as their Facebook page. The daily limit is four (4) per person.

Rainbow trout are native to rivers and lakes in western North America, but have been stocked in coldwater environments across the globe. In winter, several states stock in community ponds to give anglers an opportunity to catch an active fish when warmwater species are mostly dormant. These fish die off once water temperatures exceed 70 degrees. In Louisiana, depending on pond location and depth, that could be anytime between mid-March and mid-April.  However, few if any trout remain in these ponds by March due to angler harvest and "death from above" (eagles and ospreys).