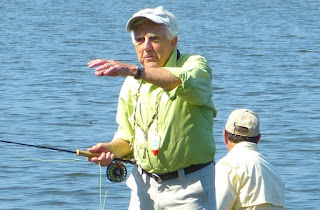 On Thanksgiving night, the fly fishing world lost one of it's greats. Dave Whitlock passed away at age 88 from a massive stroke.

Dave also co-authored or contributed to The FlyTyers Almanac, Art Flicks' Master Flytying Guide, McClane's Fishing Encylcopedia, Selective Trout by Swisher and Richards, President Carter's Outdoor Journal, and many more.  His collection of artwork is some of the very best in the fly fishing collective. His depiction of sunfish and bass feeding on insects or flies is stunningly accurate - and colorful.

Dave and his wife Emily toured the country over the last 20+ years, giving seminars, demonstrating Dave's patterns, and sharing their love for conservation. When it came to conservation, his most significant contribution was the Whitlock-Vibert Box System. The WVBS allowed trout and other salmonid eggs to incubate in natural streams, allowing fish to survive the perilous early stages of life and yet adapt to the waters as wild fish.

Dave Whitlock had a special place in the hearts of many warmwater fly anglers. That's because in the latter 20th century world of fly fishing, while there were many trout and saltwater "greats" - those whose innovation and experiences were impactful to the average angler - there were very few with bass credentials. And while Dave was certainly a trout guy half the time, the times he was a bass fisherman he was one of the very best.

At the NLFF Masters Series in 2013, he conducted one of the most unique presentations I've seen - an on-the-water seminar for bass fishing (photo above).  While I'd seen such presentations for trout on moving streams, that was a first as far as bass.

For those of us who met Dave Whitlock, heard his lectures, took his classes, enjoyed his artwork, or just listened to his many fascinating stories, the pleasure was all ours!  He will be greatly missed.