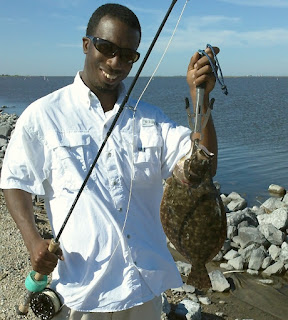 At the March meeting of the Louisiana Wildlife and Fisheries Commission meeting, the body adopted a Notice of Intent (NOI) to set an annual closed season for the recreational and commercial harvest of Southern Flounder from October 15th through November 30th of each year. The purpose of the NOI is aid in the recovery of stocks which have seriously declined in state waters over the past decade.

The problem is not unique to Louisiana. Throughout their range - from North Carolina to south Texas - Southern Flounder have declined steeply in numbers. As a result, almost every state has adopted a closed season in late fall. This is the period in which flounder migrate to the sea to spawn. In doing so, they often congregate making them easy targets for harvest.

It's not a problem of overfishing as much as low spawning recruitment. According to various studies, flounder born with XY chromosomes can determine their sex after they're born and when they're between 30 and 65 millimeters in length. These juveniles are becoming increasingly more masculine, with very few females left for future recruitment.

A study by researchers at LSU reported that the cause may be related to warmer water temperatures. There is a certain critical water temperature, that above that temperature, these tiny flounder are much more likely to become males. That's because - under environmental stress - males function better than females. They use less energy during their lifespan for growth and reproduction.  Males seldom grow over 14 inches in length, while females can get up to 28 inches.

Some states are attacking the problem from two sides. For example, Alabama not only has a closed season but they are stocking juvenile flounder raised in hatcheries where the water temperature is ideal for 50/50 sexual orientation. This will lead to a much faster recovery than closed season alone.

The public can submit comments relative to the proposed rule to Jason Adriance, Fisheries Division, Department of Wildlife and Fisheries, P.O. Box 98000, Baton Rouge, LA 70898-9000 or via email to jadriance@wlf.la.gov prior to noon on May 2, 2022.