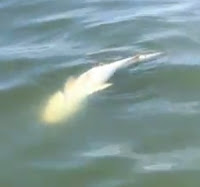 In January, the Louisiana Wildlife and Fisheries Commission sought to establish a regulation to create a 1/4 mile menhaden (pogey) harvest buffer zone. This means that no industrialized harvest would take place closer than 1/4 mile from the defined shoreline of Louisiana.  Since an amendment was added to the original Notice of Intent - the amendment would exclude Breton Sound from the buffer - the NOI had to be reintroduced for public comment before a final vote can be taken.

CCA Louisiana, the Louisiana Charter Boat Association, the Theodore Roosevelt Conservation Partnership, the FFI Gulf Coast Council, and other conservation partners are vehemently opposed to the 1/4 mile buffer because it is woefully inadequate. NO OTHER STATE allows menhaden harvest less than one mile from shore, and most states don't even allow it within state waters.

Most inshore species spawn within the littoral zone, there are greater concentrations of menhaden within this zone, and these fish (reds, specks, mackerel, etc) depend on these higher concentrations of pogies for nutrition.  Equally of concern.. there have been several documented large fish kills of spawning redfish and trout as the result of pogey harvesting bycatch within several hundred yards of beaches and passes.

The conservation groups are asking the Commission to reject the current Notice of Intent, and instead implement a statewide buffer - including Breton Sound - of at least 1/2 mile. While a one-mile buffer would be much better, the 1/2-mile buffer was the original compromise before some supporters of the menhaden industry backed away.

On Tuesday, February 22, at 5:30 pm, there will be a public meeting at the Joe Herring Louisiana Room of the LDWF Headquarters at 2000 Quail Drive in Baton Rouge. Attendees can express their concerns at the meeting.

If you cannot attend in person, then please send your public comments asap to comments@wlf.la.gov.  These comments need to be received by February 22nd.

CCA is also asking their members and other conservationists to copy their local legislators.  You can find them using this link: Legislators - Louisiana State Legislature.