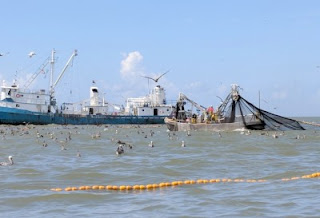 This Thursday, January 6th, the Louisiana Wildlife and Fisheries Commission will vote on a proposal to enact a 1/4 mile buffer zone for menhaden harvest.  According to its author, the intent of the regulation is to avoid user conflict between recreational anglers and commercial pogey boats.

CCA Louisiana, Theodore Roosevelt Conservation Partnership, Bonefish & Tarpon Trust and other conservation groups point out this proposal was put forward by the menhaden industry itself and is unacceptable. The overwhelming majority of spawning of inshore and nearshore species takes place in the littoral zone, which in Louisiana is at least a mile out or more.  In addition, this area contains greater concentrations of menhaden – needed for the high protein requirements of spawning fish.

While all parties would much prefer a one-mile buffer, the Commission is highly unlikely to accept that wide a buffer.  For that reason, they are asking for an amendment for a 1/2-mile buffer.

CCA and the FFI Gulf Coast Council are asking their members and other conservationists to petition the Commission to amend the Notice of Intent (NOI) to a minimum of 1/2 mile. To do so, email your comments to comments@wlf.la.gov before Wednesday at 2pm. You may also make your comments on Thursday, 9:30am at LDWF Headquarters in Baton Rouge.