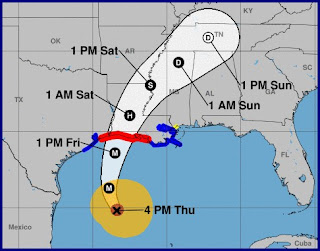 Here we go again!  Sometime around 1:00pm on Friday, Hurricane Delta will make landfall around Cameron as a strong Category 2 storm.  In doing so, it will tie the record for the most tropical storms to hit the Louisiana coast in a single year (4) and tie the most to hit the Gulf Coast in a year (9). It also adds to the record of Atlantic storms in a single year (25).

But of greater concern than any record, it will make landfall just a few miles from where Hurricane Laura did only 6 weeks ago.

Cameron, Calcasieu, and other southwest parishes were just starting to recover from Laura. Even as far north as Rapides Parish, there's still clearing of debris and cable/internet is still unavailable in some rural areas.  Delta will add salt to the wound... it's expected to take a course only slightly east from Laura, hitting the Jennings area and passing slightly east of Alexandria, maintaining hurricane force winds along this path.  The reason for Delta maintaining it's strength is it's rapid movement.

Recent cool fronts have lowered water temperatures near the coast, reducing the "fuel" needed for the storm to intensify.  It's rapid movement will not give Delta enough time to throttle down before making landfall.  For that reason, this remains a very dangerous storm.  The public is advised to take all precautions.  For more details, go to www.getagameplan.org.