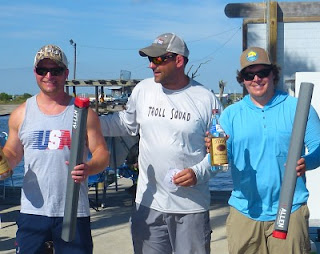 For Louisiana fly fishing interests, 2019 was another notable year.  Some good, some bad.  Here's our picks for the top stories, in ascending order.

It was another successful year for all of Louisiana's fly fishing clubs.  Moreso for the New Orleans Fly Fishers and the Kisatchie Fly Fishers (Alexandria).  Both received club awards from the Fly Fishers International Gulf Coast Council for their contributions in 2018 and the early part of 2019.

In April, the NOFF club held their first-ever New Orleans Fly Fishing Expo at Deutsches Haus on Bayou St. John in New Orleans. With Jon Cave as headliner, and a few special activities such as kayak demos, "Iron Fly Competition" and "Outdoors Writers Roundtable", this was a fun and memorable event.  It also raised funds for Casting For Recovery.  NOFF later went on to have several club outings and another successful "Rio Grande Fly Fishing Rodeo" in October.

The KFF club once again held their "Fly Fishing 101" clinic, their Summer Workshop, and their "Mixed Bag Contest" CPR tournament.  As well as participated in local events such as Cenla National Hunting and Fishing Day.  But it was the "Casting Skills Challenge" - a Fly Fishers International program initiated on the club level by Roger Breedlove and Chris Perkins that led to a significant number of their members greatly improving their casting through the program.

At any fishing tournament, it's difficult for novice anglers to beat out experienced ones.  Even moreso with fly tournaments, where proficient casting - often acquired with time and practice - is the key to success. But at this past year's "Fly Fishin For the Mission" saltwater fly fishing tournament, it was a rank newbie who outshined a bevy of veteran fly anglers.

Jessie Hamilton was one of several veterans who showed up a day early to take free fly fishing lessons from Donald Dehm of Floating Feathers Fly Fishing School. By the end of the day, Dehm had Hamilton – a first-time flycaster - not only casting effectively but prepped for fighting his first red.

On tournament day, Hamilton teamed with Capt. Ty Hibbs and caught his first redfish ever on fly rod. Then he preceeded to catch four more!  Hamilton and Hibbs won the Overall Division in the tournament, finishing ahead of 23 other teams.

Hamilton thanked Dehm for the lessons, and Hibbs for spending the extra day to scout and guide him. He called the experience a "lasting memory". Part of his prize package was a fly fishing outfit, so expect Hamilton to hone his new addiction and be back in 2020 to defend his title!

Living in Louisiana, we could probably claim inclement weather as the norm not the exception. But this year we had a few very notable negatives.

In the first half of the year, the southeast area of the state had to deal with record river flooding. The Bonnet Carre Spillway had to be opened twice and for record duration. Nutrients in the river were responsible for detrimental algae blooms across Lake Pontchartrain and along the Mississippi Gulf Coast. Fishing in the lake remained subpar the rest of the year.

Meanwhile, western parishes had 140% of normal precipitation. This resulted in poor freshwater fishing and a very late trout run on Calcasieu and Sabine.  It was hoped cooler weather would bring in the trout to Calcasieu.  But "global warming" raised it's ugly head... our first cool front didn't arrive until October, giving us the warmest September on record.

While we avoided a major hurricane this year, storm season started very early and ended very late. Hurricane Barry in July brought over 8 feet of flood tide across southeast coastal parishes. It forced cancellation of the annual "Leeville Fly Fishing Weekend" as well as the Lafayette Kayak Fishing Club's annual "LA1 Slamboree". It also wiped out PAC Kayak Rentals in Pointe-aux-Chenes, a very popular launch spot for fly anglers and kayak anglers.  Eddie and Lisa Mullen's business has since been rebuilt thanks to donations from kayak and fly anglers.  In October, tropical storm Olga brought 3 to 4 feet of flood tide across southeast marshes - on the same weekend as the Kisatchie Fly Fishers and Red Stick Fly Fishers annual fall marsh trips.

2. Kirk Dietrich publishes his first book - and nails it! 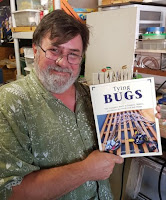 A native of Chalmette and lifelong resident of southeast Louisiana, Kirk is a is a nationally-renown fly tier recognized for his many innovative warmwater and saltwater patterns. His Kirks Spoon and Kirks Rattle Rouser have been perenial favorites for Orvis customers for two decades. He's also written numerous articles for magazines and websites, and has been awarded the Fly Fishers International Gulf Coast Council Fly Tier Distinction Award.

Kirks is also considered one of the best anywhere when it comes to balsa and other hard-body flies. For this reason, there was epic excitement when his first book came out this summer. "Tying Bugs: The Complete Book of Poppers, Sliders, and Divers For Fresh and Salt Water" has 224 pages with 917 photos and over 400 detailed step-by-step instructions, along with numerous historical anecdotes. The book sells for $31.95 and has received rave reviews. One of the reviewers on Amazon - some dude named Pat Cohen - states, "This book is a wealth of knowledge for anyone looking to get into topwater flies...if you thought crafting flies from balsa or cork was out of your reach, this is the book for you". We concur!

1. Speckled trout in trouble, and "changes must be made"

LDWF marine biologists dropped a bombshell at the September meeting of the Louisiana Wildlife and Fisheries Commission. While there had been plenty of anecdotal evidence from anglers that speckled trout fishing was well below normal, the presentation revealed that the problem is real, has been for some time, and is getting worse.

According to biologists, our seatrout spawning potential recruitment (SPR) is the lowest of any Gulf state, having fallen below the target of 14% since 2012, and currently at 8 percent. The problem is happening across all estuaries. In addition to overfishing, there's been a steady increase in winter kills of trout. The latter is most likely due to coastal erosion and loss of deepwater havens during hard freezes.

Early in 2020, LDWF will advance several management options to the Commission. They include any combination of creel limit reductions, increase in minimum size limits, slot limits, closed areas, and possibly even closed seasons. It should be pointed out that other Gulf states have much more restrictive seatrout regulations - including new ones implemented this past year in Florida, Alabama, and Texas.
Newer Post Older Post Home