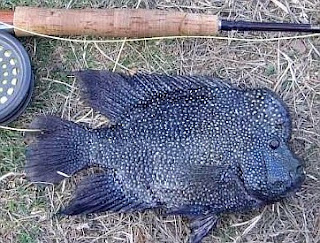 Earlier this month, it was reported by outdoors contributor Joe Macaluso in The Advocate newspaper (Baton Rouge) that the Louisiana Outdoors Writers Assocation (LOWA) has added the Rio Grande Cichlid to the state's freshwater fish records list.

Rios are native to south Texas and northern Mexico. Due to the aquarium trade - and intentional or accidental releases into waterways - they've become established in Orleans and Jefferson parishes, and southern Florida. Incapable of tolerating very cold water, Rios are most active from late Spring thru early Fall, and seemingly disappear in Winter. They've become a favorite of warmwater fly anglers due to their tendency to eat flies, their wary nature and dogged fight when hooked. Their popularity among flyfishers led to the New Orleans Fly Fishers club establishing the annual "Rio Grande Rodeo". The 10th annual rodeo was held in early October.

So far, flyfishers have been elated with the news. According to LOWA Fish Records Chairman Lyle Johnson, the state's only cichlid will now list the top 10 of this species effective immediately. This will apply to both "Rod and Reel" and "Fly Fishing" divisions. Records can be submitted via forms on the laoutdoorwriters.com website.
Newer Post Older Post Home