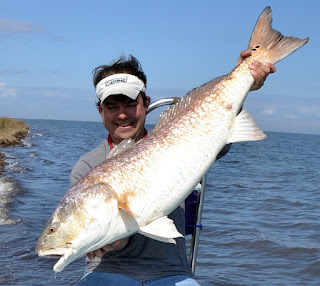 This past Friday and Saturday, the IFA Kayak Tour National Championship was held out of Grand Isle. The objective of this saltwater-based tournament series is to earn highest points based on a daily catch of biggest redfish and biggest speckled trout. Because the format is CPR (catch, photo and release), there is no slot limit restrictions on reds. So bull reds are not only acceptable, they're targeted.

The 38 qualifying competitors had no trouble catching bull reds behing Grand Isle. According to several Facebook posts, HUNDREDS of bull reds were caught by contestants. All on artificial lures (tournament rules). While none were caught on fly rod, prospects for fly anglers should be really good until it gets too cold.

As is often the case this time of year, many of the late spawning bulls will move to the backside of barrier islands and even into the lower marshes.  It's not uncommon to find these redzillas in shallow water areas in places like Hopedale, Port Sulphur, Leeville, Weeks Island, and Lafitte.  Targeting them on fly is not only challenging, but once hooked, a long, epic battle is guaranteed!

Back to the IFA championship... winning his unprecented fourth title was Benton Parrot of Spanish Fort, Alabama who frequently fishes Louisiana waters. Benton's two biggest reds were 43.00 and 41.375 inches, and two trout were 17.00 and 19.00 inches. Other top five finishers were Aaron Clay, Scott Bienvenu, Matthew Vann, and Fil Spencer. Biggest red was Spencer's 44.25 inches - which based on conversion was approximately 35 pounds!
Newer Post Older Post Home