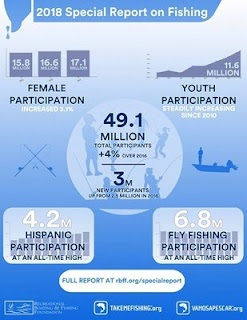 At ICAST, we were given an oral presentation on the current state of recreational fishing in the United States. This data was compiled by the Recreational Boating and Fishing Foundation in conjunction with the Outdoor Foundation, and was released last Monday.

Since 2010, fishing has been on a slow but steady growth. Currently there are 49.1 million participants, with the largest growth in the age group 25 to 44. Men make up 65% of all anglers, and whites make up 78% of the sport. Only 33% of all anglers have a college degree.

With regards to fly fishing, growth has also been on constant rise since 2010, and at a slightly higher rate than fishing in general. In 2017, there were 6.8 million fly anglers.  This represents an all-time high in participation!  The largest growth was in the age group 25 to 44, which makes up 35% of the sport. Nearly 45% of all fly anglers have a college degree. Almost 72% of flyfishers are white, but the number of Hispanics continues to grow, now over 11 percent. Almost 1 million people were new to fly fishing in 2017, another all-time high.

There's no question that outreach programs such as "Fly Fishing 101" or similiar clinics put on by clubs, retailers, and agencies are having an impact. Also, exposure to our sport via the internet and television programming (NBC Sports Channel, World Fishing Network, Pursuit, etc.) are also generating interest.
Newer Post Older Post Home