We're a month away from ICAST / IFTD 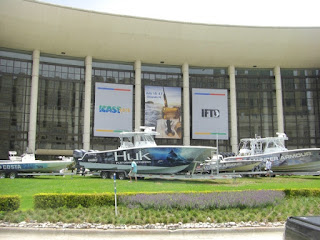 For decades, ICAST and IFTD held separate events, in different locations, usually 2-3 weeks apart each summer. In 2013, the two shows merged into one. Giving retailers, media and industry folks a chance to see all fishing-related products at one event. And reduce their expenses of having to travel to two different events. ICAST and IFTD held separate auxiliary events - such as seminars and demo days - but the rest of the event was seamless.

That 2013 show was held in Las Vegas. Since then, ICAST/IFTD has been held in Orlando. The event has continued to grow - last year it hosted 582 exhibitors in nearly 2000 booths covering 650,000 square feet of space. Almost 15,000 folks attended - quite a number considering that ICAST is not open to the general public.

However, this July 10-13 will be the last year of the merged show. Next year, ICAST returns to Orlando for the 6th straight year, while IFTD will be held in Denver. While the merged show has numerous advantages for the fly industry, it's no secret that many have "Florida Fatigue". Most fly companies are located in the Midwest or west of the Mississippi. Florida was fun at first, but the combination of long travel and tropical heat have offset the saltwater and warmwater fishing opportunities. For those of us media who cover different categories of products (e.g., fly fishing and kayak fishing), the merged show has been golden. It will be greatly missed!

Why is IFTD so important to you the readers? It represents an opportunity for us in the media to see, exam, and even test out just about every fly fishing product there is. Including some new products that will hit retailers in Fall 2018 or early 2019. Even the largest public event - the Somerset Fly Fishing Show - has only a fraction of this many product companies.

As writers, that gives us great responsibility. Take fly rods, for example. Of the nearly 80 companies that sell fly rods, only about five percent are sold at any fly shop. And 90 percent of all fly shops combined only sell about 16 different brands. That same level of exclusivity applies to nearly all product lines. There's also many accessory products that seem lost in a world where marketing isn't just important - it's life or death!

Most media simply edit the countless product press releases. I'm proud that we're one of the few that go to every booth, exam and test every product (best we can) and give an unbiased review. As well as give the inside scoop on the people and companies that make these products. And learn why each product fits a specific need. It's not an easy task - from 8:30am to 6:00pm each day with no lunch break. Plus the demo days. Even then, we sometimes miss a product.

Once again, our focus will be on fly fishing products, any and all accessories of interest to fly anglers, kayaks and kayak fishing accessories. As of today, there's been some rumors about new rods from Sage and others. As for kayaks, Bonafide and Old Town have confirmed new boats. Everything is tight-lipped, even among pro staffers. Companies love to make the big announcements at ICAST, and we respect that.  Here's what we can say - the last three years have seen an unprecedented number of new fly and kayak offerings, and like with Orlando, there's fatigue!  So expect fewer new products this year.
Newer Post Older Post Home